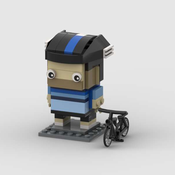 This multi-stage cycling race throughout France is usually held over 3 weeks (21 days) in July and considered, the most prestigious Grand Tours of the cycling calendar, as well as one of the largest sporting events in the world.

The race was first held in 1903, organised by L’Auto newspaper to boost sales. The race has been held annually ever since.

The Brickheadz figures I have created recognise the 4 main jerseys worn throughout the event and are awarded for various categories.

The iconic ‘Maillot Jaune’ or Yellow Jersey (chosen for the colour paper used to print L’Auto) is awarded to the leader of the General Classification, the single rider with the lowest aggregate time.

The Polka Dot Jersey is awarded to the ‘King of the Mountains’, where riders are awarded points for the top placings on a climb with the highest points scorer winning the jersey.

The Green Jersey or ‘Maillot Vert’ is awarded to the leader of the points' classification which is very often won by a sprinter as they are likely winners of stages as well as intermediate sprints during a stage.

Each figure is decorated as a representation of the jersey, complete with matching helmet and bike colour.
I have always enjoyed watching the race since I was younger, with my Dad and now as an enthusiastic cyclist and father, watching it with my own children. I designed these jerseys after making a Brickheadz cyclist version of myself and thought that this would make a fun set to create and collect for other cyclists and sports fans alike.
Allez, Allez, Allez!