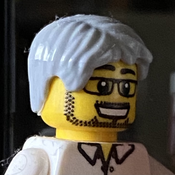 The CreatorExpert modular buildings are great when displayed, but the non-corner building sides (in Assembly Square, or the Detectives Office for example) can look a little ugly and so I wanted to hide them with a little extra building.

After a little thought I realised that billboards quite often appear at the end of real life office blocks and rows of houses, and thought a Lego style billboard would neaten up the look of a modular building street.

In the digital render the actual billboard white tile strips are blank, but these could be turned into an actual poster. In the test version I built, I took an old lego advert, enlarged that, printed it, stuck it to the white tiles and sliced it to become the billboard image that you can see in the final image.

The model is simple in its design, featuring;

Note: The base is currently composed of 2 8x16 green plates as I was unable to find an 8x32 green plate.

If this idea was to be created, what I would like to see modified would be a poster split across the 16 white tiles, with the possiblity of a second set of 16 blank tiles to allow user preference.

Thanks for taking the time to read my first idea.