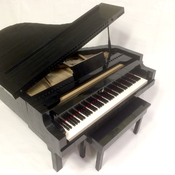 As a professional piano player for the last 10 + years, and having played the instrument since I was ten, I thought it fitting to build a baby grand piano that is as accurate as possible. The piano, to me, is something that a lot of people can relate to. It's an instrument that many families have in their home, even if no one really plays. It's also the only instrument that can double as furniture, so I feel it makes a very nice display model to have out. The size and detail of this build are also very impressive, if I do say so myself.

While it lacks the functionality of the keys being able to move (like a very cool recent submission), I did try to include as many functions of a real piano as I could within the scale I used. It includes all 88 keys depicted, a fallboard that opens and closes, the lid opens, along with the metal harp and wood underneath. I also tried to nail the curve of the body as closely as I could, because that detail was kind of the most important thing for me to see along with the correct number and scale of the keys. While I'm not sure exactly how many pieces were used, I'm quite certain that it's under 3,000. It's taken roughly 6 months to complete, with many rebuilds and redesigns.