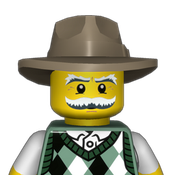 By Swag grandpa
8 comments
This is my set representation of the classic movie starring Bill Murray . It has the hotel , the groundhog grasss square and the 80s diner . It includes 9 minifigures , Phil , Rita , Larry , the hotel owner mrs Lancaster , Nancy , the man who holds the groundhog , Doris the waitress , Ned Ryerson and the old man  . Let’s start on the grass square where the groundhog is proudly sorting on a stage next to his handler and on the grasss phil is being filmed by Rita and gets his sound caught by Larry they are next to a news van with equipment in the back . The hotel has a Nice walkway with white fences and after you go through the woooden door you will come into the hotels first floor where mrs Lancaster sits waiting for hotel reservations and checkouts , also on the first floor is the eating area with tables and a big can of steaming soup . After you go up the stairs you go down a nice hallway and you go to Phil room . In Phils room there’s a bed and next to it a table with the alarm clock that plays , I got you babe , every time he wakes up to the same day , there’s a wardrobe with loads of Easter eggs to Bill Murray’s other roles , there’s Peter venkmans ghostbusters suit in the wardrobe and on the top of the wardrobe is a newspaper of the ghostbusters and a lasagne (a Easter egg for Garfield on which bill Murray starred ) . On the street next to the hotel is Ned Ryerson and the old man , next to Ned Ryerson is the puddle that phill steps into , the old man is the man asking for money just a few seconds before Phil meets Ned Ryerson . Across the street Is the 80s diner where Phil eats loads and loads of food , there is a jukebox just as you come in but near the door is a sign you see in a lot of diners , there’s a table with pancakes , Dorris the waitress and a road crooks sign (a reference to the beetles ) .
please support this so that Lego Groundhog Day can become a reality