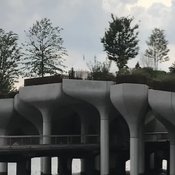 Throughout my life, I have always had a passion for subways, trains, and transit. Being born and raised in New York City, inspired and nurtured this interest further, as the subway system was my main form of transportation on a daily basis. As a young child, I began modeling trains with my LEGO (another strong passion from my youth) of the trains on which I had traveled each day.

Over the years, these passions have thrived and as a culmination of my deep love for both, I have completed this LEGO model.

I present to you my LEGO creation modeled after the 1940s Vintage R9 Rolling Stock from the R1/R9 subway car fleet. The R9 was part of the Independent Subway System (the IND, a.k.a. the ISS) of New York City. Known collectively as the “Arnine” family series, this train fleet was the first city-owned underground subway in New York City, competing with the privately-owned BMT and IRT systems. The IND System was referred to by riders as the 8th Avenue Subway. During the years spanning 1930-1940, the first subway fleet delivered for the IND Line was a collection of more than 1,700 Arnine subway cars under different contracts ranging from R1 to R9, numbered 100-1802. The “R” stands for ‘revenue’, ‘rolling stock’ or ‘rapid’ depending on whom you ask. The cars themselves were built by the American Car and Foundry Company, the Pressed Steel Car Company, among others. The R9 car that I have modeled remained in service for over thirty years, from 1940 until finally being retired in 1977.

Since a New York City Vintage Train LEGO set does not currently exist, I wanted to make my own. I was specifically drawn to the R9 cars from the Arnine fleet for my modeling inspiration, as these particular cars have character and a style of their day, from the eye-catching signage on the exterior to the bullseye lighting within.

This model is for play and/or display! The interior design features representations of the details from the R1/R9 fleet, including the seating, bullseye light fixtures, open-face fans, ‘strap-hanger’ (subway passenger) handles, and poles. There are also two engineer cabs within the car’s interior. As an added feature, bridging the past, present, and future, the interior of the car is decorated with a collection of original Transit Maps that I have created in the spirit of the maps one might find on the trains of the day. The roof of the car is removeable, enabling play within the car.

The R9’s exterior features signal lights, horns, roof vents, eight functioning doors (four on each side), as well as representations of the car's era-specific signage on the front, sides, and rear faces of the train. Underneath the car, there are two motor trucks at both ends that have buffers and power pickups. The R9 model sits upon a standard LEGO track with customized cross ties.

The complete set consists of 3,000 pieces.

I wanted to build and propose the R9 Vintage Train as a LEGO set as a way to represent and honor the rich history and historical importance of New York City’s Transit system and to share my passion with other LEGO and train enthusiasts around the world.

Building this model and being able to share it with you has brought me much joy. It is my dream that my LEGO creation will become an official LEGO set so that other train and transit enthusiasts can build one of their own!  Please support my project and spread the word!