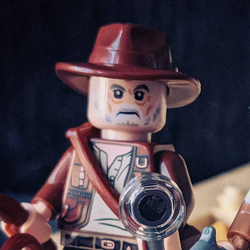 SCANNING... MINERALS DETECTED!
In the not too distant future space explorers are actively traveling throughout the universe in the hopes of exploring and studying alien planets. On a recently discovered desert world, a research scientist is scouting the arid wasteland for unusual mineral caches on her mobile hover-laboratory. Following her scanning equipment, she has come across an odd looking rock formation with a possibly promising cache inside. However, a native inhabitant of the planet has set up a nomadic outpost nearby, and the scientist is unsure how he is going to respond to her and her research vehicle…
SPACE GIRLS ARE AWESOME!
The idea behind the Planetary Exploration set is twofold. First off, I meant it to be a very conscious step away from the familiar theme of battling evil alien races. Instead, I tried to envision a more idealistic scenario focused around the study of unknown worlds and meaningful interaction with alien lifeforms. Secondly, I wanted to emphasize the need for more diversity in female roles by placing a no-nonsense female scientist in the lead and give girls who dream about exploring outer space someone to look up to.
CONTENTS & FEATURES:
The set consists of three main elements: a planetary survey vehicle, an unusual rock formation to conduct said surveys on and an outpost belonging to a native inhabitant of the planet. See the added photographs and the descriptions below for details!
396