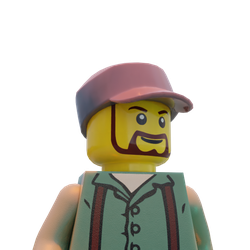 Building it for real! I uploaded this model not too long ago, but I’m very happy about all the support and positive feedback I received so far. Now, that I got more than a hundred supporters means, that I’m in the second round to to reach 1000. Wow, this tiny, little trailer seems to be more popular than I initially thought.

The project started by tinkering around with the MecaBricks workshop and trying to build a model, that shows an alternative way of housing and lifestyle, but I did not even have the intention to upload it to LEGO IDEAS in the first place. I wanted to make a digital design, so I can build it with real bricks later on. If you wondered, why a few of the bricks and color combinations are not the most obvious choice: it was all about using bricks, I could actually get my hands on to turn the digital model into a real one! While that did not have any bad outcomings for the look of the final design, it required a lot of iterations to replace very rare (and thus very expensive) or non-existant parts/color-combinations with cheaper ones and proved to be more work than I expected. But it is said, that design is about solving problems within given constraints and I was happy to take on the challenge! ;-)

The model consists of about 320 different parts and has roughly 1070 parts in total, so I had to place a lot of orders at different shops to get all the bricks. Today, the first orders have arrived and in a few weeks, I should have all the parts together to finally build it.

Thank you all for supporting the Tiny House with Garden! Stay tuned for updates over the next weeks! :-D