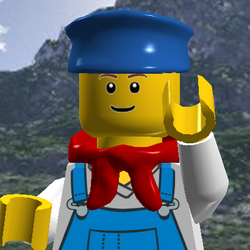 From living in Alaska I got the idea to make a Lego Alaska railroad set (since I also like trains), I really think that this will be a hit in Alaska. It will include: an engine, some passenger carriages , a train station, and eight minifigures (based on people very close to me). the station has a lobby and a model train layout ( the train station in Fairbanks really has a model train layout and a club). I was trying to make the carriages long and the only piece long enough goes down in the middle so I used it as a place for people to keep their luggage. I hope that you choose to support and tell your friends about my project and other train related projects.