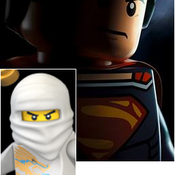 By NINJAGODC
3 comments
After the final battle against Lord Garmadon, the evil wizard, Mailstroman. He has used dark magic to bring evil copies of the ninjas... The original ninjas must harness the power of light, along with Lloyd.

A new hero is emerging, Jay's brother. He has donned the Yellow Ninja mantle and has minor control of air. That means he is not an elemental ninja.*


*He was caught in an atomic blast, but some how survived and can blow at speeds up to 100mph. Working story!

This picture shows Mailstroman (the guy with Garmadon's body and a wizard hat), Luft and his double (that's the yellow ninja), Jay's 'floating' Elementral slider, Samurai X + her double, the light staff, and Cole's black-smith like shrine.


The new quest is to collect the elemental knives and grab the staff of light. That will erase those dark doubles!

This is the white Ninja shrine. The vehicle Zane (the WHITE one) is called an "Elementral slider". Every ninja's is identical (Kai's is seen in the background). They all have a unique weapon
(Zane - shurican | Kai - katana | Jay - spear | Cole - scythe | Luft - pole blade).

This is the most detailed image I've posted. It shows the mini dojo, the light staff, the corner of Jay's 'floating' Elementral slider, Cole's shrine, Zane's shrine, Kai's shrine, Sensei and Garmadon fighting. (Next to them is Samurai X and her double.) You can see Garmadon holding a syringe. That's how he made the doubles; with DNA of the ninjas.

These are the bricks for Kai's Elementral slider and the finished product in the back.


PLEASE SUPPORT!!!! THIS IS MY SECOND PRODUCT!!
Motivation: