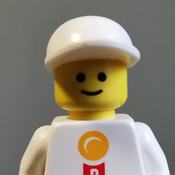 By Brickday1
154 comments
Welcome to the Brickville observatory with orrery and dome. On the ground floor is a working orrery where the Moon orbits the Earth and the Earth orbits the Sun. On the walls are several Star Constellations including Orion, Ursa Major, Cygnus and Cassiopeia. On the floor, as the orrery rotates, you can measure the months, seasons and the summer and winter solstices. Climb the spiral staircase to the first floor library where minifigures can study about astronomy and access the top shelves with moveable ladders. On the second floor is an astonomer's office complete with a grandfather clock, desk, miniature orrery, globe and a balcony telescope. Ascend the roof ladder to the observation tower which contains another working orrery. And at the very top is the observation dome which rotates a full 360 degrees and contains a moveable telescope. The dome also has working sliding doors that can close to protect the sensitive equipment within.
Inspired by the architecture of Victorian era observatories this modular building celebrates astronomy and exploration of our universe.
The nineteenth century passion for science and discovery has only increased into the 21 century where we have discovered over 300 planets around other stars. And, once again, we look to the Moon and beyond as we prepare for a human mission to Mars.