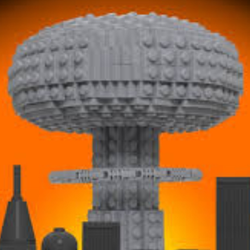 I did not get this idea from a real car it just popped up. On the car’s bonnet (which is not openable) I have put two red grill slopes for a cool look. Same as on the front just they’re in black. Now to the back, there’s a boot that is openable and it can fit pretty much anything in it. My recommendation: you should put LEGO in it. On the bottom of the car I have put two layers of white studded tiles. This car is pretty much just red and white. On the inside there is a joystick, a fuel gauge and two seats for two minifigures.