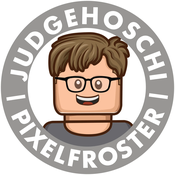 By JudgeHoschi1234
45 comments
What is it?
It is a Ninjago Play-Set. It shows a basement with a lot of traps and a part of a groundfloor. The Ninjas have to take the way through the basement.
First thing is to balance over a small creek. Nobody knows what is in the water.
Behind the spider web a monster waits for prey. The monster worm is playable from the backside of the building.
After this the Ninjas have to cross the snake pit.
From a small room they may use the ladder to reach the groundfloor. There is a small secret door. Now they have the chance to free Nya.
Why did you build it?
My kids asked me for a compact building to play against some monsters, snakes, spiders and so on. I deceided to build some "adventures" into a basement and a possibility to rescue somebody.
Why do you believe this would make a great LEGO set?
It would be a great set because we have a lot of possibilities to play and it is easy to transport.