Lord of the Rings - Chess 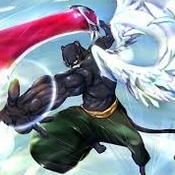 Prepare for the last battle of the human, dwarfes and elves against Sauron and his army - in a game of chess!

This is a chessboard with figures, inspired by the "Lord of the Rings" series by J.R.R. Tolkien.

Sauron and Gandalf the white as kings,

Aragorn and Saruman the White as queens,

Legolas and Gimli/ Mouth of Sauron and the Witchking as bishops,

Merry in his armor as knave of Rohan and Pippin as Gondorian Guard.

I hope you like my project and support it!