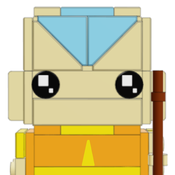 Long ago, the four nations built together in harmony. Then, everything changed when the Fire Nation took all the sets apart. Only the master builder, master of all building techniques, could stop them, but when the world needed him most, he vanished. A hundred years passed and my brother and I discovered the new master builder, an airbuilder named Aang. And although his airbuilding skills are great, he has a lot to learn before he's ready to rebuild anything. But I believe Aang can rebuild the world.

I just finished watching Avatar: The Last Airbender and it was an amazing show, so I decided to build something for it. There were so many possibilities of things I could make that I couldn't decide. But then I had a sudden inspiration and I jumped onto my laptop and built 3 Brickheadz of the main characters Aang, Katara and Sokka. They were very fun to make and I really hope they get made into a set, so please hit the support button.

I hope my set would include:

Aang is a young airbender who was trapped in ice for 100 years with his giant flying bison Appa. Until one day, two water tribe siblings, Sokka and Katara found him. He is the Avatar, and he is destined to save the world from the fire nation. But first he must master all four elements. I tried to make him smaller than the other two because he's younger than them. I also gave him a staff piece to represent his glider. His arrow marking is achieved by using 2x2 triangle pieces in light blue and tan. It continues on the top and back of his head with light blue 2x4 tiles. He also has a printed 1x4 orange brick on his chest.

Katara is the only waterbender left in the southern water tribe. Her mother was killed by the fire nation and her father is gone in the war. She, Aang and Sokka travel across the four nations to help people in need and help Aang master the 4 elements. I gave her a whip piece in trans-blue to represent her waterbending. Now that would be a pretty cool piece. I also gave her some 1x1 quarter circle tiles on her forehead to represent her braids that come over her face. She has a 1x2x2 printed brick as well, to show detail on her water tribe clothes. Also, on her back, I made a braid coming down, using 4 1x1 circle tiles on a 1x4 plate.

Sokka is Katara’s older brother who wanted to go to the war and help his father, but his father told him to stay back and watch over Katara. When he’s not cracking jokes or whining about food, he’s planning small (or large) attacks on the fire nation and making maps. Unlike Aang and his sister, he cannot bend any elements. I gave him a blue boomerang piece to represent, well, his boomerang. Also, he has a small ponytail on the top of his head. To make the hair on the side look shaved, I made the color be dark tan. He is the only character in here to have 2 printed pieces, (besides the eyes) both are 1x2x2 bricks. One is on the front to represent his water tribe clothes, the other is on the back to represent his boomerang holder.

If 10,000 people support this set, you could have your very own Lego Avatar Brickheadz! So if you are passionate about the set, spread the word!