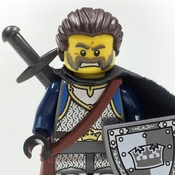 By Wochenender
80 comments
Dragon Knight's Stronghold is a classic folding castle with a lot of play features!
It features a whole enclosed castle that hinges to open up to a full broad wall with a huge lockable gate tall enough for a mounted knight. As the name suggest it's inhabited by a knight from the dragon faction. He's accompanied by two of his loyal soldiers. In the stronghold you can find the knights armour and weapons as well as a prison cell with a dedicated key. There's a secret treasure hidden beyond the castle walls and a falcon knight and his fellow squire became notice of it. With a full functional catapult equipped they are marching for the Dragon Knight's Stronghold...
Once an ill-fated lad is captured, he can be freed by the catapult and the collapsing wall mechanism.
I really had fun building this castle using new bricks and figuring out some play features and I think you would too! It's been to long since the last wave of castle sets. So let's at least bring it back with a little Ideas set!