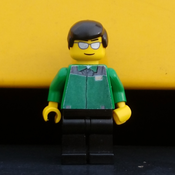 By MateuszBuduje
56 comments
Hi, I'm back to LEGO Ideas with a new design! LEGO bricks have been my passion for 25 years, and for almost 10 years I have been designing public transport vehicles. Today I would like to offer you my best project, a 100 percent Siemens Combino Advenced tram.
18 years ago, the first Siemens Combino Advanced tram, out of 14 ordered by Miejskie Przedsiębiorstwo Komunikacyjne, came to Poznań (Poland). It was one of the most modern trams in the world. The tram has an aluminum body structure. The nearly 30-meter long vehicle enables transport for many people, including people with disabilities. Because the tram is completely low-floor. It is equipped with 57 seats, inverters and four asynchronous AC motors with a power of 100kw.
Shortly after the first wagons were delivered, a structural defect was discovered, which was remedied before putting into service.
Trams are called Mercedes by drivers because they are very good to drive, have little breakdown and are well adapted to long hours of work. Currently, the Siemens Combino Advanced trams are among the most reliable tram rolling stock in Poznań. Trams can also be found in Amsterdam (the Netherlands), they are very similar to those in Poland. The only difference is that the Dutch wagons have a ticket stand. The trams were produced at the Siemens factory.
After this short introduction, it's time to move on to the details, i.e. the presentation of my idea. I started the construction of the Siemens Combino Advanced in August 2020 and initially created a model without an interior. It was only in April this year that I decided to improve the shape of the tram and reproduce its interior. The 85 centimeters long model (the actual vehicle is 29.7 meters long) was made of 1990 bricks. The miniature tram has 46 seats (due to the construction used, it is not possible to install double seats), ticket validators, handrails and a spacious cabin for the driver. The model has been adapted to the installation of a drive that enables movement and it is possible to install a door opening and closing system. Optionally, it can be equipped with external and internal lighting of the passenger compartment. The tram shown in the photos is a virtual project. Currently, I am collecting money for its implementation.
The Siemens Combino Advanced miniature tramway complements the existing series of railway sets. The model could become the nucleus of a new series, e.g. on the subject of public transport, where there would be sets enabling the construction of trams or buses from around the world. It is worth knowing that trams are an important link in the city, without which we would not be able to move from home to work. A tram is an eco-friendly vehicle powered by alternating voltage. In some cases (breakdowns, damage to the traction network), it can drive a long section of the route without power. At this point, it uses previously charged batteries. Thanks to this tram, your minifigures will be able to travel from home to work and to various activities, and at the same time take care of the environment by leaving the car in the garage.
If you like my idea and would like to put this tram on your shelf, add it to your city or become a tram driver, please support me. Just click the "Support" button. You can additionally write your opinion and check my profiles on social networks. I will be very pleased if you become an observer of my passion!
Thank you for getting acquainted with my project!