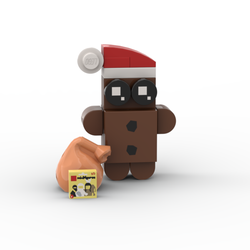 Tuk-Tuks are an Asian taxi, they have three wheels and spaces to sit people in the back. When I was in Sri Lanka I saw lots of Tuk-Tuks and I thought to myself "I wonder if I can make a Tuk-Tuk in Lego?". I got back from Sri Lanka a week later and I started working on these Lego Tuk-Tuks and after some hours hard work I was done!.

The set idea comes with two Tuk-Tuks one blue and one red. They both mirrors on the side, lights on the front, a window at the back and other details, you can even take of the roof to look inside the Tuk-Tuk!.

I based the models on the Tuk-Tuks in Sri Lanka and tried to make them look as detailed as possible yet still keep them small!, The reason I think this should be a set is because Tuk-Tuks are funny little vehicals we all know and love and i'm sure lots of people would like a mini Lego Tuk-Tuk to play with or to sit on there desk, you can also make a scene and put them in it!.

This small set has a big potential so hop on in and support and play your part in getting this idea to its destination!.