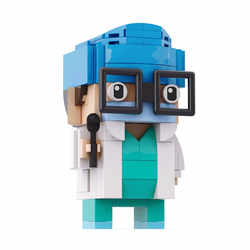 My inspiration comes from the chapter “Boggart in the Wardrobe” of “Harry Potter and the prisoner of Azkaban”. There is a boggart in the wardrobe, a shapeshifter that prays on fear. Boggart came out from the wardrobe and appeared in the shape of  a mummy. And I intend to demonstrate a scenes of a Egyptian mummy and coffin in the form of BrickHeadz.
The highlights of the model is the manifestation of the mummy bandage and the interaction between the mummy and the coffin. The mummy is fit perfectly for the inner profile of the coffin. It’s interesting to put the mummy into the coffin and close the coffin. The design of the cover of the coffin is also delicate which shows the image of pharaoh.
I hope you will like this Mummy of Egyptian Pharaoh BrickHeadz. Thank you for your time, suggestions, comments and your support！