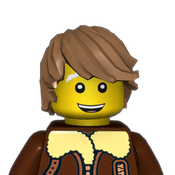 In the beginning, Mr. Makuro and his best friend Mr. Master, created the Hero Factory with the goal of creating heroes to protect the galaxy. They each created their very first hero: Mr. Makuro made a simple, friendly looking hero; Mr. Master made a big, comlicated and terrifying hero. Mr. Makuro did not approve of Mr. Master's creation, making Mr. Master filled with rage.

Later, Mr. Master snuck into the Hero Factory and used the assembly tower to transform HIMSELF into the most powerful creation of all. He called himself Tyrannex and re-created his original hero that Mr. Makuro had disapproved of; Tyrannex called his creation Snatcher. But Mr. Makuro found out what his friend had turned into, and ordered Tyrannex and Snatcher exiled.

Tyrannex left, but vowed to seek revenge on the Hero Factory and Mr. Makuro.  To this day, Tyrannex and Snatcher have never been seen again, but Tyrannex's plan has only just begun...

NOTE: the minifigure is NOT a part of the set; it is just included for size comparison.