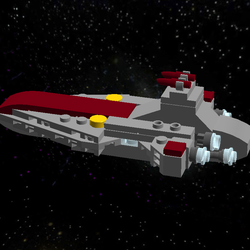 Brickfilm Builder
6
It's a Tolmekian airship from the anime movie Nausicaa valley of the wind. It's a miniature version of the ship and includes 4 Minifigures two Tolmekian soldiers, a higher ranking Tolmekian soldier and Kurotowa. I'm a big fan of the movie and studio Ghibli. When I saw the movie I decided to build one of the ships myself. I think this would be a great Lego set because it would be the first Lego IDEAS anime set and it's based on a very good movie with a big fanbase.
6