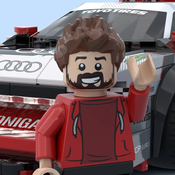 Ice Planet 2002: “The ice planet Krysto, with its vast network of frozen tunnels and caves, is the capital of a remote part of the universe known as Ice Planet 2002. It is from this snow-covered planet that rocket technicians are conducting top-secret research. Their findings are coveted by the Blacktron forces and even renegades within the Space Police.”

As a child, one of my most fond memories was discovering that Lego was about to release their latest space theme in the 1993 LEGO catalog. With its neon orange, blue, and white color scheme, its new planet location, ski’s, visors, rockets, and its Minifigure with identity (Commander Cold with his big mustache, the first female Space figure, and a cool dude that looked like he just came from the ski slopes.) the Ice Planet 2002 theme stood out from its predecessors in so many ways and inspired many new MOC’s in the years that followed.

With 2023 approaching, The idea I am proposing is to release a 30th Anniversary edition of one of the most memorable Lego Space themes, In my opinion, Ice Planet 2002.

To launch this campaign. I like to introduce you to my updated version of my ultimate favorite space set as a kid, the Ice Planet 2002: Deep Freeze Defender.

Deep Freeze Defender II: The Deep Freeze Defender II was designed to align the aerodynamics with that of modern Orbital vessels such as the Space shuttle orbiter or the Boeing X-37. Opting to replace the hexagon, square shapes with more rounded curved shapes. With added defense weapons to help them fend off those pesky Blacktron forces and Renegades within the Space Police.

The Rocket: With the Ice Planet theme based on rocket technicians and their top-secret research. I made it a focal point to start with the design of the new rocket first. I wanted the new rocket to look like it has evolved from the technology of the classic Ice Planet rockets but still retain the look and feel of the classic design. Basically, it is scaled up with more thrust to enter Orbit.  Once the final version of the rocket was decided on, the main ship design was scaled up to ensure that the Rocket could be housed within it as with the original Classic.

Research facility: As a kid, I envisioned the back section of the original Deep Freeze Defender to be the mobile research facility of the spaceship. With the slight increase in scale there was ample space for the ice sled and its launcher and to make my vision a reality with the inclusion of a command center for the crew to do their top-secret rocket research.

The Minifigures: I did a slight update to the design of the Classic Ice Planet Minifigures. They all got updated faces with actual hairpieces to fit in with the modern Lego Minifig facial designs. New thermal space armor to protect Commander Cold and his crew against the harsh sub-zero temperatures of Planet Krysto. Actual saber handles for their chainsaws. They also acquire two new recruits and a service bot to help them expand research and to accompany them on their missions on this strange freezing planet.

Why we should revisit Ice Planet 2002: Ice planet had a unique charm to it, it was a good shift from the classic space themes that preceded it. It had a lot of first for its time, first female astronaut, first space minifigs with unique identifiable facial features, even the Neon Orange pieces (despite the mixed feeling amongst Lego fans) was a first and just worked for the theme. I also believe it to be the last of the memorable Classic Space themes. It set a new standard that space themes that followed, in my opinion, could not quite live up to.

After over two decades, Ice Planet 2002 still live close in our memories, you just need to do a web search to see the thousands of fan-made MOC’s, illustrated art, blogs, and YouTube reviews to appreciate the impact it had on the imaginations of a generation of fans. And judging by the actions of my 5-year-old replacing all his Lego sets from “a galaxy far far away” with my old classic Ice Planet 2002 sets, it still has the ability to capture the imagination of generations to come.

Shout out to all the Fans: To all the old and new fans of the Classic Space themes. Your opinion in this project will be appreciated. We have an opportunity to get Classic Space themes back on the shelves, but that will only happen with your collective support and sharing of projects like this one. Please Support, follow and share and together we can make it a reality.