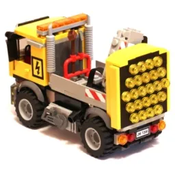 I always wanted to build a zoo to my modular city, but I could not find a good model to follow. I wanted a compact build, but single baseplate mocs looked more like animal storage containers, than an actual zoo. On the other hand, good zoos had a huge floor area. After several attempts to draw a floorplan I ended up with the result, that the zoo must be multi level, ﻿were the ﻿animals ﻿﻿have a large ﻿free area at the base level﻿, and the ﻿visitors can walk over the area on ﻿hillside and hanging pat﻿hway﻿﻿﻿﻿﻿﻿﻿﻿﻿﻿﻿﻿﻿﻿﻿﻿﻿﻿﻿﻿﻿﻿s.
To start fast I reshaped the Ewok village to be the base of a jungle scene. I found that it could fit on two baseplates, and with two other baseplates I managed to add a forest and an arctic scene divided by a hill. Inside the hill there is a cave with bats and a snake in terrarium, and there is also a room for the animal caretakers with access to each areas. The scenes merge seamlessly, but it is still easy to divide the zoo into single baseplates.
The jungle scene is the most complex. The left tree is the feeding tree. Kids can feed the pig, but the original escape feature of the tree is still there and works fine, and the pig could be dropped down to feed the felines. The middle tree is the monkey tree, chimps live there. The third one is the bird tree with the bird cage. Home of colorful tropical parrots and a white owl. In front of the bird cage the visitors can use the cat caller drums. There are three drums, one for each feline, which calls them into the stone circle, and the visitors can watch them through the glass floor lookout. The right tree is for pet caress. The hamsters and the bunny all love the kids, and especially some carrot.
Next scene is the forest with a black bear and a skunk, and there is also a gray owl in the tree. The scene features a waterfall, and the water flowing around the scenes, to the arctic, then to the jungle, and then pumped back up to fall down again. There is a pathway going up to the top of the hill.
Last scene is the arctic. This one includes the zoo entrance, compatible to the modular street. Polar bear and pinguins live there. There is the access to the caretaker area at the bottom, and the entrance to the cave. Also the pathway continues to the top of the hill.
I completed this zoo in 2018. Since that many new animals has been released, some of them like the reindeer or the brand new tucan or the rare flamingo could be immediatly added. But it would also be easy to extend the zoo with new area for the elephants and lions from the last year's City Wildlife Rescue sets. This zoo could even be the base of a series similar to the Fairground Collection.