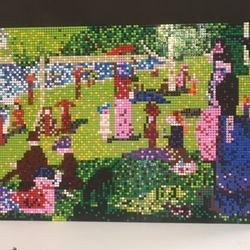 Monsters have infiltrated Camp Halfblood! Grab your weapons from the Big House and the camp against monsters and untold horrors with Percy, Annabeth, and Grover. Based upon the hit Rick Riordan books, this set includes the iconic big house, Thalia's tree, the entrance to camp halfblood, and of course, a cyclops. Minifigures include the demigods Percy and Annabeth, Grover the satyr, a Fury, and possibly the Oracle. Weapons include Riptide, Annabeth's dagger, Grover's pan flute, the Fury's whip, and water so Percy can channel his powers of Poseidon.

After defeating the invading monsters, be sure to return to the big house for a dangerous quest (with Chiron's permission, that is).