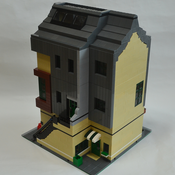 It was based on McDonald’s located in Sokcho which is a beautiful seaport of Korea.

I decided to make it, because It was a very beautiful building which
was broadcasted on advertisement.

Size of the bottom board is 32 X 32, and it is possible to separate each layer like the module which was released in existing.

A combination of the strong red, black that harden looks, and white that represent the dapperness is clean and only necessary part of building.

Especially, the sign wasn’t used of stickers, and it was only made of brick.

You can know that detail of creations is respectable.

It induced the natural light which can be seen inside without illumination through skylight of roof.

It may be fun to compare it with the photo of the actual building.