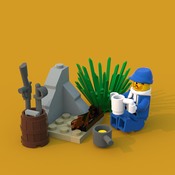 This may not be the the main Royal Knight's Castle, but a Kingdom stays affluent by trading with other nations. The outpost consists of a trading port that is connected via a drawbridge to a small Fortress. Historically speaking important tradeports were often protected by a Fort nearby, to prevent pirates to raid the merchants.
The set includes:
- Eight minifigures: two Royal Knights with their horses (they're knights after all), four Royal Soldiers (two spearmen and two archers) and two merchants.
- A small boat
- The fortress and port
- Accessories and some trading goods.
The Castle and Port are easily to seperate for all those who just want a normal castle. It is build in the classic castle building style we all know and love. I tried to stick to it. As the LDD doesn't include raised baseplates, I had to improvice it with parts. (th iconic ramp plate of course) The whole thing consists atm of 1147 pieces, allthough if you count the baseplate as one element, it has about 730. I improved upon this by using Stud.io for the missing pieces, which also gave me the ability to add some printed elements.
Also the torso, shield and faceprints are modded into the designer and are not part of the vanilla version of LDD.
I build this castle as a nod to the great Castle theme and think it would make a lot of fans really happy to have a set like this on store shelves again, since it has been a few years since we got a LEGO castle set.
I hope you like this one and if you have some suggestions on how to improve on it, feel free to leave a comment.