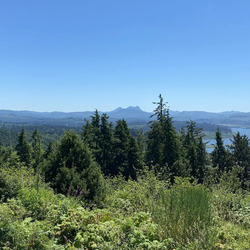 Mt. Hood is an Oregon mountain that is both a popular tourist attraction and a spot with the potential to be volcanically active. This is Oregon's northernmost mountain and sits in the Cascade range, formed by subduction of the Earth's tectonic plates. It's pristine looks and slopes perfect for skiing and snowboarding make any area around the mountain welcoming at any time, along with it's proximity to Portland. Surrounded by beautiful forests and rivers, and rising 11,250 feet (3429 meters), this mountain can be seen from many places across Oregon.

My model is a micro scale model of this famous mountain in all of it's glory, with micro scale trees (not to the scale of the mountain) surrounding the edges of the build.It resstss on an 8x16 plate and would make a nice decorative model or gift.

I am inspired by Mt. Hood because I have not yet seen a LEGO set based on something in Oregon and would love to see such a set be released. This project would be a great start for many reasons. Because of its popularity, people from Oregon, Washington, and tourists who have been here, would be eager to purchase this product. Since it is the epitome of what the "normal" or "expected" mountain is like, other fans would get it so they can add it to their cities and models.

The Earth's natural beauty needs more recognition, and making this a set would do just that.