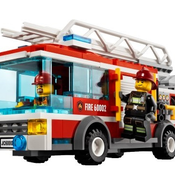 This Lego set is based on an incident where a person has fainted and is being treated by paramedics from the LHS (Lego Health Service).

The large ambulance can fit one person in the drivers seat, one person on the stretcher in the back and one person stood up in the back. It has fully functional opening doors on the back with a working patient lift. The ambulance has markings on which consist of the star of life on the sides, front and back, and "Ambulance" on the sides and back and backwards on the bonnet.

Inside the large ambulance there is a heart monitor mounted on the wall, a few cupboard for storing equipment, a drip, and an oxygen control panel.

The ambulance car is primarily white with green and yellow Battenberg on the sides. It has red and yellow hazard striping on the rear bumper and "Ambulance" on the front, roof and back.