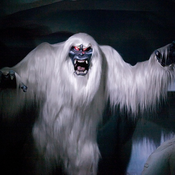 By TheHappyHaunter
27 comments
It has been 80 years since the release of Walt Disney's Pinocchio, a classic film. In celebration, I have built this project, which is based on the scene when Pinocchio and his father escape the jaws of Monstro the Whale.
The set has about four hundred pieces and two minifigures. The minifigures are Pinocchio and Geppetto. There are also three other characters, Jiminy Cricket, Figaro, and Cleo. The main build of the set is that of Monstro, the gigantic whale that swallows Geppetto when he's out searching for Pinocchio. Monstro's jaw is able to move as if to eat a minifigure. Also, there is a raft which Pinocchio escapes on.
I love Pinocchio. It is my favorite film from the Walt Disney Animation Studio. I believe that this would make a great LEGO set as it is good for play, it is based on a classic movie, and I think it would be pretty popular. Thank you for the support.