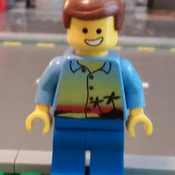 So here is my LEGO 1966 Batmobile, I tried my best to create the Batmobile and make as close to the original car as possible.

And the Batmobile would not be complete without the dynamic duo minifigures... Batman and Robin!!

I believe this would be a great set for everybody, including all the Batman/Batmobile collectors out there.

I am really looking forward to everybody reviewing and supporting my LEGO Ideas 1966 TV Series Batmobile project!