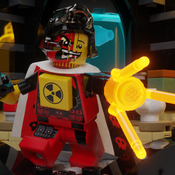 This is a project I made for fun, using a lot of flames! I recently went to the LEGO store, ( now about a year ago) and got some flames, I thought they would be nice for using in a project idea, I previously made a lego bastion contest entry, which used many flames. This project features a shipwreck in lava, with the captain, or operator, standing on what’s left of the ship. There’s also a crows nest that is fallen in the lava, on fire. Here are the details!
The overall view: The overall plan was to build a functioning, cool, display, which can easily be displayed on a desk, table, or maybe a mantel! The function in this project is the working LEGO light brick, shown in one of the pictures. Also, it’s physically built, and I have included a minifig, the operator!
The Ship: What’s left of the ship is the deck, and a fallen crows nest, and is sinking into the lava!
The Flames: this is built up of hundreds of little flame pieces and other translucent orange pieces to make up the lava.
The Inside: so under the flames is a solid block of bricks incased in tan walls, which is tiled over, so the fire can rest up on the block with out getting stuck in the studs.
The Window showcase: As shown on the back, there is a little showcase window, with a flame retardant suit, showing what the operator should have been wearing!
The Story: Once the operator swept off into the endless ocean of blue, he came upon a bright light in the middle of the night, coming onto the deck, he found that he was sinking with his burning ship, but gladly, he escaped on a Helicopter, that was ( thankfully ) checking out the ocean. I have not built the Helicopter yet, because this is supposed to be a small, functional, display that can fit on someone’s desk or table! I might add it in an update!
Phantom_E
If you have read this far, then please say what color, and how big the Helicopter should be, ( in the comments) I’m thinking it should be orange and white, and have a water firing cannon, to help put out the lava, or it could have a rope ladder that pops out!
#P_E