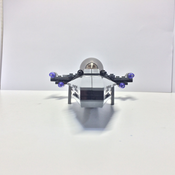 Here I gladly introduce to everyone my Starfighter "MOC" (My Own Creation). I really hope you like my first project on Lego Ideas!

Initially, I named this spacecraft "Dyakura MK 2.5 Series", because this design has undergone several modification until the final version I present you here. This entire design is purely designed by me and is not an imitation of any sci-fi movie (this creation looks very similar to a Star Wars starfighter, but it really isn't an imitation of any craft in the movie).

The whole design is kept simple because I intended to make the "perfect" assault spacecraft for mass production (for example, imagine you are a Galactic Republic High General of Space Warfare and you want to have a whole swarm of agile spacecraft that are also aggressive). The name "Dyakura" is randomly made just for the sake that it sounds "pretty nice" (I think) :))

To descend onto the ground, the spacecraft transforms into  "landing mode": the two side landing gears  unfold and the tail engine bends down at 45 degree to become the third landing gear. This ensures the stability when the spacecraft lands.

The things you are about to read is simply imagination, unless this Lego model could become a real life spacecraft. The spacecraft has a reason to be called an "Assault Jet". It is armed with twin focal laser machine gun in front of the cockpit, a medium-heavy laser canon and a high-explosive missile (flick missile) on each wing.

Mini Figures and Others

The mini figure I used here is a Star Wars pilot, because it looks just much better than other mini figures :)) As for the "Republic Symbols" on the spacecraft, they are also for temporary decoration. If my space craft is able to enter production, the decorative stickers may be re-designed (if the Lego Group asks so).