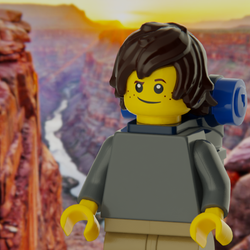 By Vince Guy
17 comments
In chapter 2 of Penguin Quest, Liz and Peet manage to lose the orca gang as they travel deep into the arctic mountains. The terrain is steep and treacherous. Hidden in one of the high mountain valleys they meet an old Snowman inventor named Herbert, and his companion Hooty the owl.
Liz and her huskies take a well needed rest in Herbert's cabin, while Herbert shows Peet his airship. The Temple of the Golden Fish could be on any one of the nearby peaks. Herbert and Peet set out at dawn in the airship to find it.
But watch out! Baron Von Bill is hunting the skies for Peet and the Temple in his new Albatross Stunt-plane. Can Peet find the Temple in time?
This set is around 550 pieces and includes:
-Herbert's Airship
-Albatross Stuntplane
-Herbert
-Peet
-Hooty
-Baron Von Bill
There are a number of play features as well, On the airship you can:
-Use the shovel to load coal into the airship engine.
-Man the starboard snowball cannons to fend off Baron Von Bill
-Throw the port-side grapple line to reel the airship in to the mountain
-Move Hooty to any perch you like. I prefer him up on top of the balloons.
On the Albatross Stunt-plane you can turn the back half of the plane into a sweet jump whenever Baron Von Bill needs to make a stylish exit from the vehicle.
I hope you enjoy this set as much as the first one. More is on the way :).