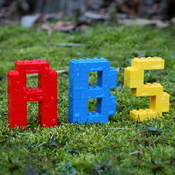 By ABS Constructor
102 comments
"You're a mean one, Mr. Grinch."
Meet the Grinch, in Lego!
The original film Dr. Seuss' How the Grinch Stole Christmas was released in 1966. After watching and thoroughly enjoying the animated re-make Dr. Seuss' The Grinch presented by Illumination and released in 2018, I was inspired to build this 1381-piece model of the Grinch. My version is primarily based on the 2018 film.
Built with 23 points of articulation and standing over 20 inches (52 centimeters) tall, this model would make an awesome display piece capable of various, unique poses. I designed and rendered the model in Studio and composed the photos on Pixlr.com.
Thank you for reading! Please support and spread the word to make the Grinch's heart three sizes bigger!