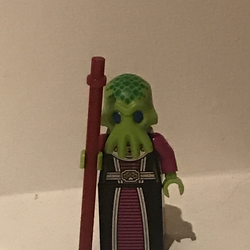 By Jacksonrana
3 comments
Welcome to the Mystery Solving Sleuths Inc.These four teenagers and their husky solve  mysteries together. This set takes inspiration from Scooby-Doo and other mystery solving gang shows.They are fans of the wolf man, Frankenstein, Dracula, the Swamp Creature, having these monster posters around their tree-fort. In their club house they have a red circular been bag chair, a table with a book on it with all the monster lore you will ever require. The roof is modular for easy access In the far back from left to right their is Star, a pyschic, who is a sci-fi enthusiast, a fan of Doctor Who and monster films, she has orange braided hair, a tie die shirt with a brown jacket, jean shorts and a doctor who sonic screwdriver prop always with her lap top on hand. Next there is John a human the long blonde haired bearded hippie who is leader of the group with his tie die shirt, brown jacket and blue jeans. Then there's Jack the dwarf with a grey suite, brown braided hair with a black cowboy hat and a brown short beard Last there's Ysebel, the elf goth wearing a purple shirt, black jacket and pants. Then there is their husky Willow, The Club House roof is modeler allowing easy access to the interior of the club house.There is a male and female cop to arrest the crooks after the mystery is solved.
There is the Club House and four other platforms that are attachable to the main tree house allowing a build your own adventure/ mystery element. There Is Three Cases to choose From
The case/ platform I have attached to the club houses on the right is called   the Case of the Wailing Maiden. The Gang Here's about the wailing maiden and choose to investigate strange sightings at Morden Cemetery finding what cops have called the Wailing Maiden. It is up to the Mystery Solving Sleuths to figure out what is going on. They find clues leading to a woman named Merida who is searching for the lost treasure of Madam Windwalker, a green elf who had inherited a lot of money.
The police show up after the Slueths do all the hard work to arrest the crook. There is a cathidral where Merida is searching, the roof is modular and inside there is a outcrop which opens up to reveal a chest full of treasure.
The case/ platform attached to the front of the club house is The Case of the Werewolf. Jim Forline has discovered an abandoned  hut which has treasure hidden within the basement he is searching for it . It is up to the Star, John, Jack and Ysebel to solve the case. You can remove the floorboards to reveal the chest. You can remove the roof for easy access
And finally there's the the platform on the left of the club house which is the case of the Snake Man:
In the desert of Utah, there has been sightings of a man snake, that has been scaring the local tourists. Flynn Morgo is searching a local cave for treasure It is up to the Mystery Solving Sleuths to figure out what his going on, using there love of mystery solving and there intellect to figure out who the perpetrator is and bring him to justice. The mountain is modular and splits in two
I built this set being a fan of club houses, Scooby-Doo and mystery solving series, Halloween, costumes and wanted to build something that was similar to that with my own twist. That is where the idea for the Mystery Solving Sleuths came from. I believe this would make a great set because there is a lack of tree fort sets and lack of mystery solving sets, first there was Scooby-Doo now there's the Hidden Side and  I love a good mystery themed IP and this will add something new.