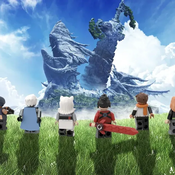 By Graphenegem
4 comments
This LEGO Ideas project seeks to replicate the Diamond Mech (as named by the fans) From the Cartoon Network show Steven Universe
This LEGO Ideas set would come with four body parts, which can attach to each other to form the complete Diamond Mech
On top of that, it would come with a stand to store them on, the design of which is taken directly from the episode Familiar
A few other things it would come with would be a mini figure for Volleyball (though at the time she was known as White Pearl) and LEGO recreations of Ruby, Sapphire, Amethyst, Pearl, Rose Quartz, Lapis Lazuli, and Peridot
I also wanted to make a small, affordable Ideas set that would (theoretically) be under $30
Additionally, there is a large storage space underneath the diamond insignia, allowing a place to store the mini figure or ship parts when not in use