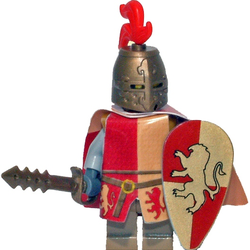 For all those who want to learn more about the 4in1 Lego Pueblo Creator set go to this link and do not forget to check out the updates as that project evolved in time through your comments:

You can have the stand-alone tower set as part of the Lego Pueblo 4in1 creator set as it is built using the bricks of that set or you can vote here just for this set. The stand-alone tower set would be cheaper of course. It has only 2/3 of the bricks of the bigger set. Take a look at the hammock. It is very stable and the minifig can be placed on a brick (in spite of the cloth) without falling down. The minifig really sticks to the hammock!

Hope you like this set and the Lego Pueblo 4in1 set.