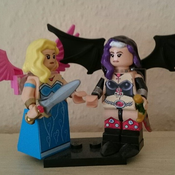 I see some great Donald car´s in the Web and Lego Ideas, but i think THIS Car is missing...

This Car is Phantomias Car!

Donald´s Original "313" can switch the Color from red to Black (or dark Blue).It can change the number plate from "313" to"X". The car have some spezial features like, a ejection seat, flying and other features in some Comics. The Original Car "313" and "X" have also a foldable backrest or trunk lid, where the nephews sit when donald drive with them, a little to late, to school.

In my Version i have realised:

In the Scene a Beagle Boy (Panzerknacker) is bursts the wall of the Prison to free his brothers.

The last Picture is shown the normal colored Car "313" from Donald, you can build with a few extra Bricks.

I thing it will be a great LEGO Set, because "Phantomias" from Disney Comics a great Hero and many Kids, Teens an Older People like them. And today Set like this is definitely missing!