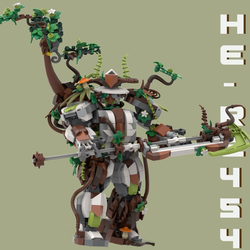 By Supernaam
51 comments
HE-RE 454 spend manny years on the planet terra extra. A planet that’s full of forests and seas much like terra bricka which is precisely what he was looking for. The distance between the two planets is enormous, and so far no form of communication came threw. He was send to terra extra to research if it is possible for minifigures to live on this planet. The planet where they lived terra bricka was getting crowded. HE-RE 454 never understood why they send a heavy unit. After a mysterious event shut him down the vegetation around his body grew on and through him, and by a stroke of luck released enough power on his circuit board to reboot him with no data after his landing to tell him what happened. As he awoke a quick analysis of the photosynthetic power made him realize that he could use the forest and its biomass as a source of energy.

As he progresses to perfecting the skill of “gardening” he meets Wu, a very energetic monkey who likes HE-RE 454 for its ability to grow banana trees. HE-RE 454 has a large broken nuclear reactor which he now uses to power his body for day to day life with the tree as a solar screen. Wu likes to join HE-RE 454 on adventures ,so he decided to live In the tree.
One day he wakes up...
BOOTING: Heavy Reconnaissance Unit 454
CODENAME: HE-RE 454
MISSION: Terra extra
STATUS: Pending..
ROTATIONS: 9855
ENERGY LEVEL: Sufficient
“You know what Wu, dying here wasn’t bad.''
Monkey noises
''I wish i knew too buddy, but there is simply no data of what happened after my landing. The forest tells me it must have been quiet an event. When the  minifigures send me here to see if this terra extra is habitable, i never tought i would stay so long.
A stroke of pure luck that photosynthesis gave my circuit board enough power to reboot. Trust me wu, it is better to be a soldier in garden, than a gardener in a war.''
Monkey noises
''No im not gonna create a new musa forerst here, we talked about this. Biodiversity is very important for maintaining a rich enviroment, my energy levels depend on it. Did i not turn sector 93 into a musa forest for you.
Muffled monkey noises
''Besides the forest is telling me there is non organic material in a unkown sector.
I have to find it, there might be more information about my shutdown there.
You joining me for an adventure buddy?''
Enthusiastic monkey noises
''Thats the spirit!''
As they approach what appears to be another unit send from terra bricka, HE-RE 454 recognizes the markings. It’s an old mineral probe that can easily be revived. He quickly gathers energy from the fauna around him and reboots the probe. Other than HE-RE 454 the probe has lots of information on his shutdown. This probe was send to find minerals, but instead it found life. It quickly reported a message. But the message was intercepted by a large group of investors (the collectors). They wanted to keep the planet to themselves, so they shut down any robot send here from terra bricka. HE-RE 454 feels the urge to get back to terra bricka, and complete his mission. His quest is to harness the power of the planet, and return to the minifigures and save them from the collectors.