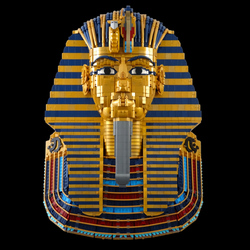 Today on December 1st it’s exactly one year ago that the project started. Within one year the project gathered over 8000 supports. Many, many thanks!

To celebrate the 1st anniversary of the project I have been building another version of the Gingerbread House. This house may be a bit more appealing to girls with the pink colour scheme, heart-shaped windows and marzipan door. This house also has the new easy-to-construct roofs from the digital design I posted earlier this year. The house is just a little twist on the original and shows that with a simple change of colour scheme and some minor twists of shapes you can actually personalize the Gingerbread House any way you like it. 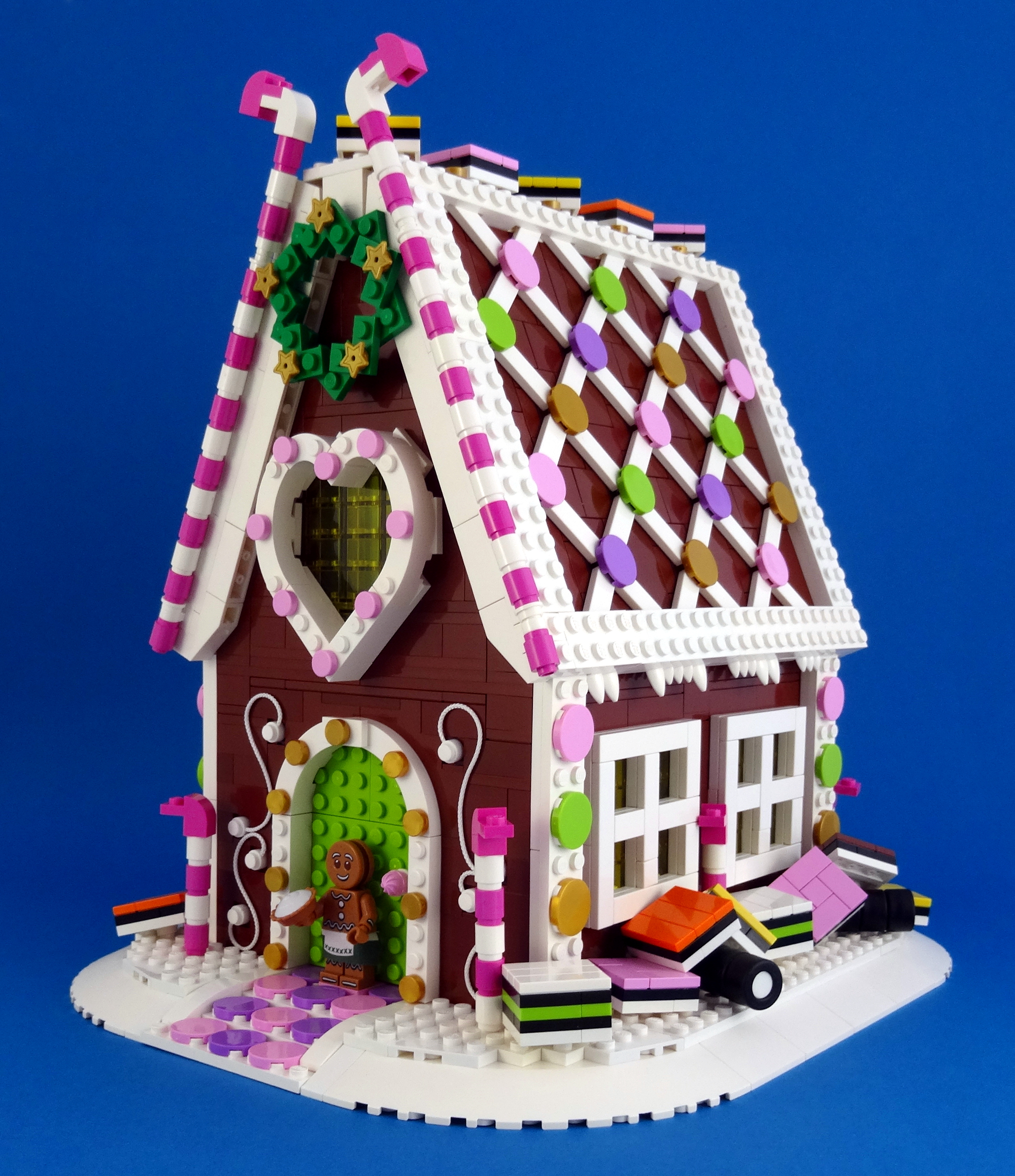 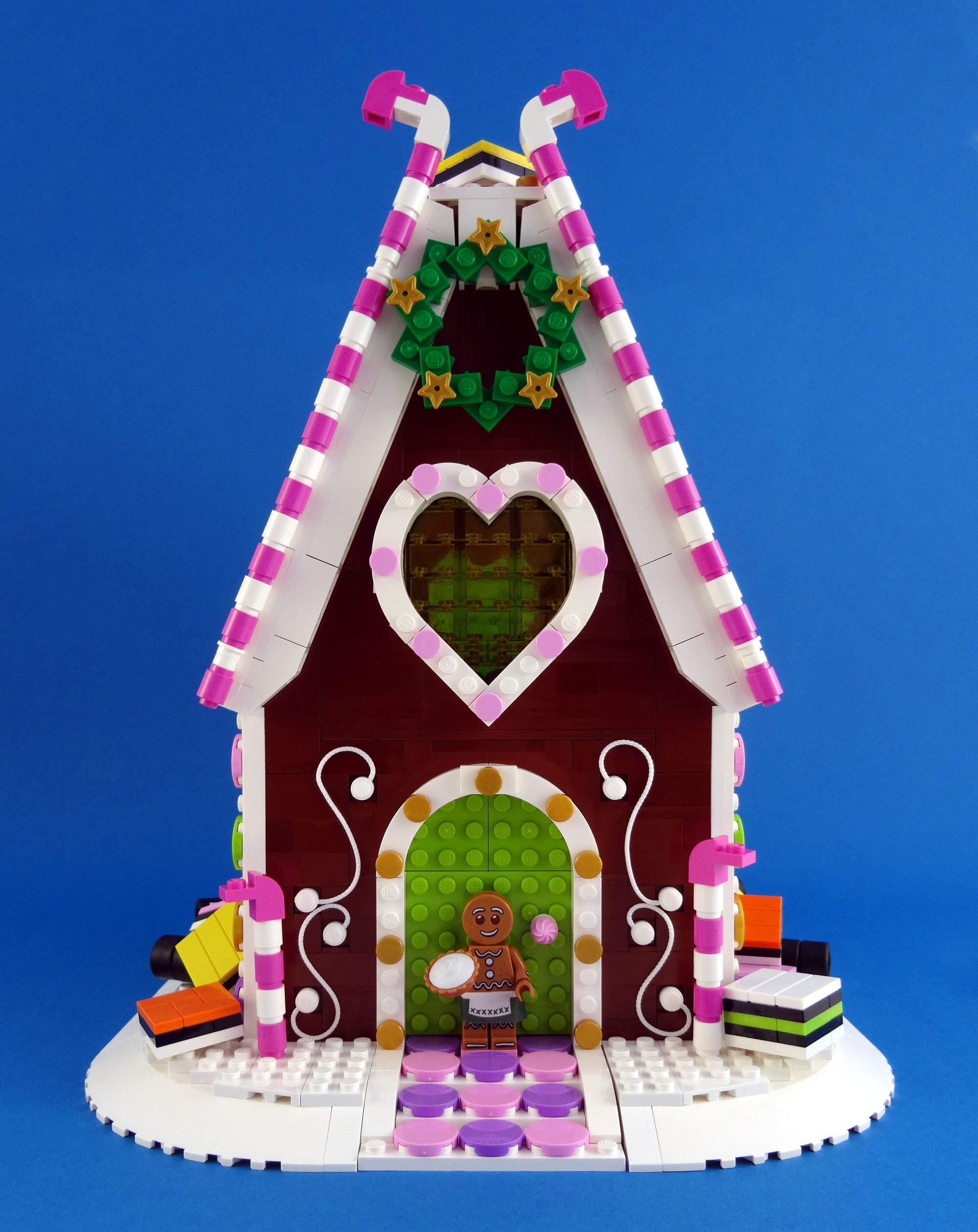 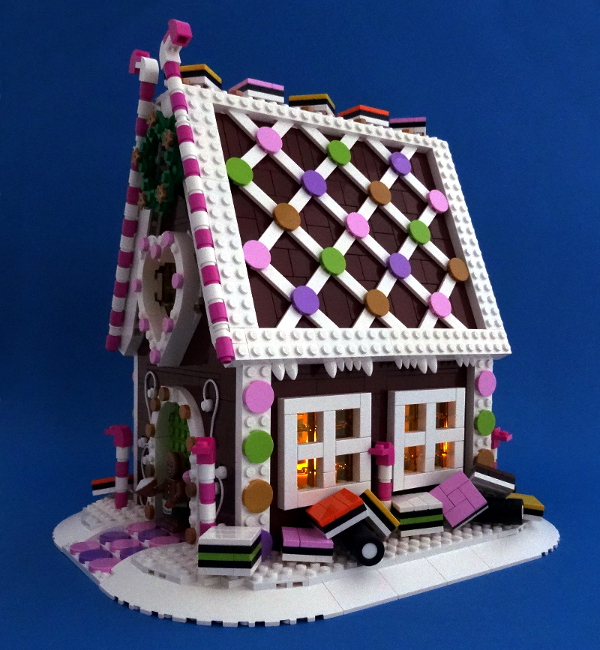 In previous update I showed you how the original design is constructed. You may have noticed that some sections are pretty difficult to construct. Therefore I began designing a new version that LEGO could actually produce as an official set. I had several goals:

Note that the white icing swirls near the doors should be there as well, but I could not find them in LDD. 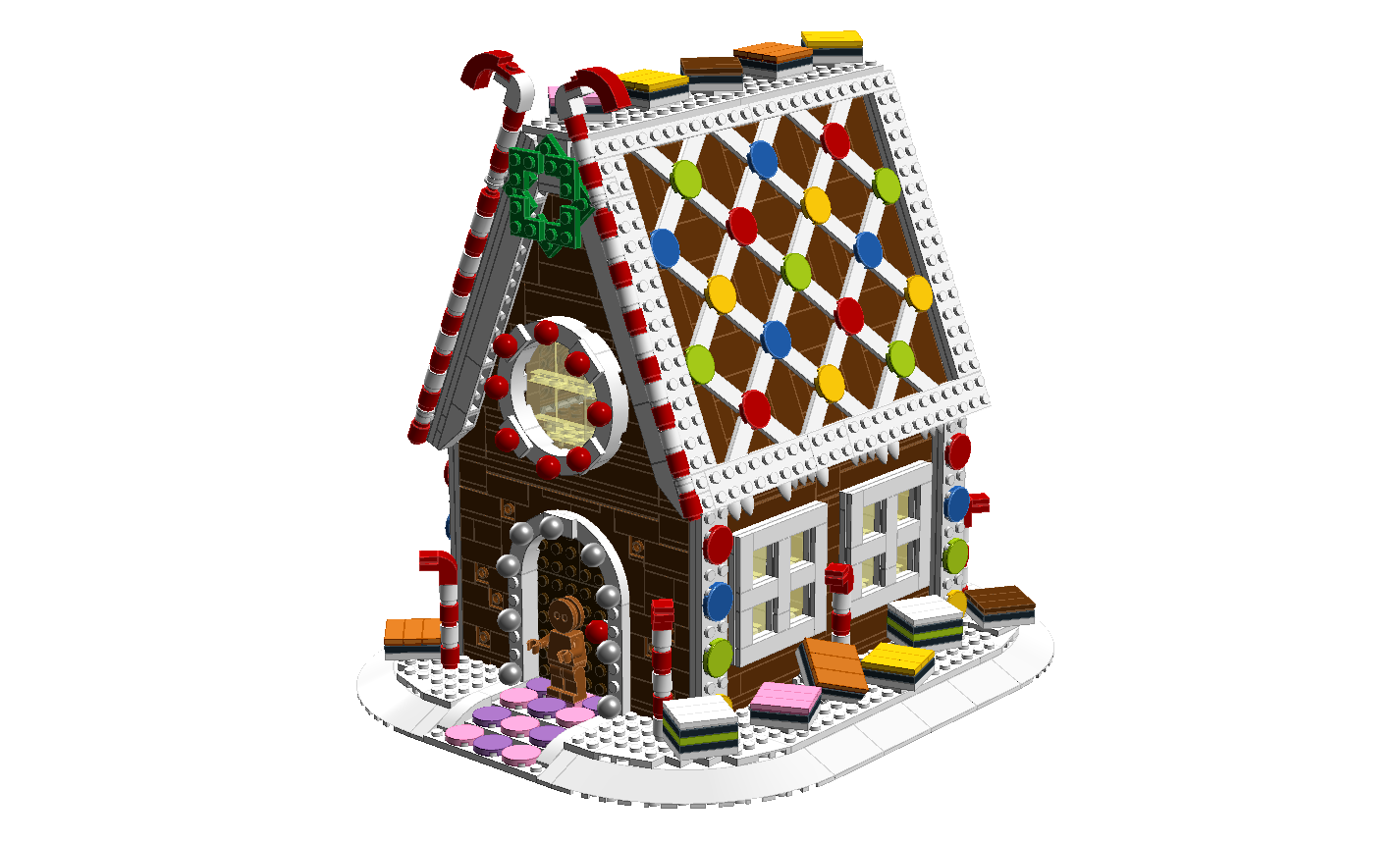 Like the original design, the new version does not come with an interior. I build it as a decoration with electric light inside (an electric candle or power functions light) that can be accessed by pulling out the door. That does not mean that LEGO could not add a play feature/ interior to this. Instead of pulling out the door, a complete wall section could be pulled out to play with the interior and minifigures.

The new design is, like the original design, divided in 3 sections: the base, the top section and the roofs. I will show you how each section is build. Just a note: any gray coloured part can be any colour (it’s not visible in the final build).

The new base design is very similar to original one. The pictures speak for themselves. 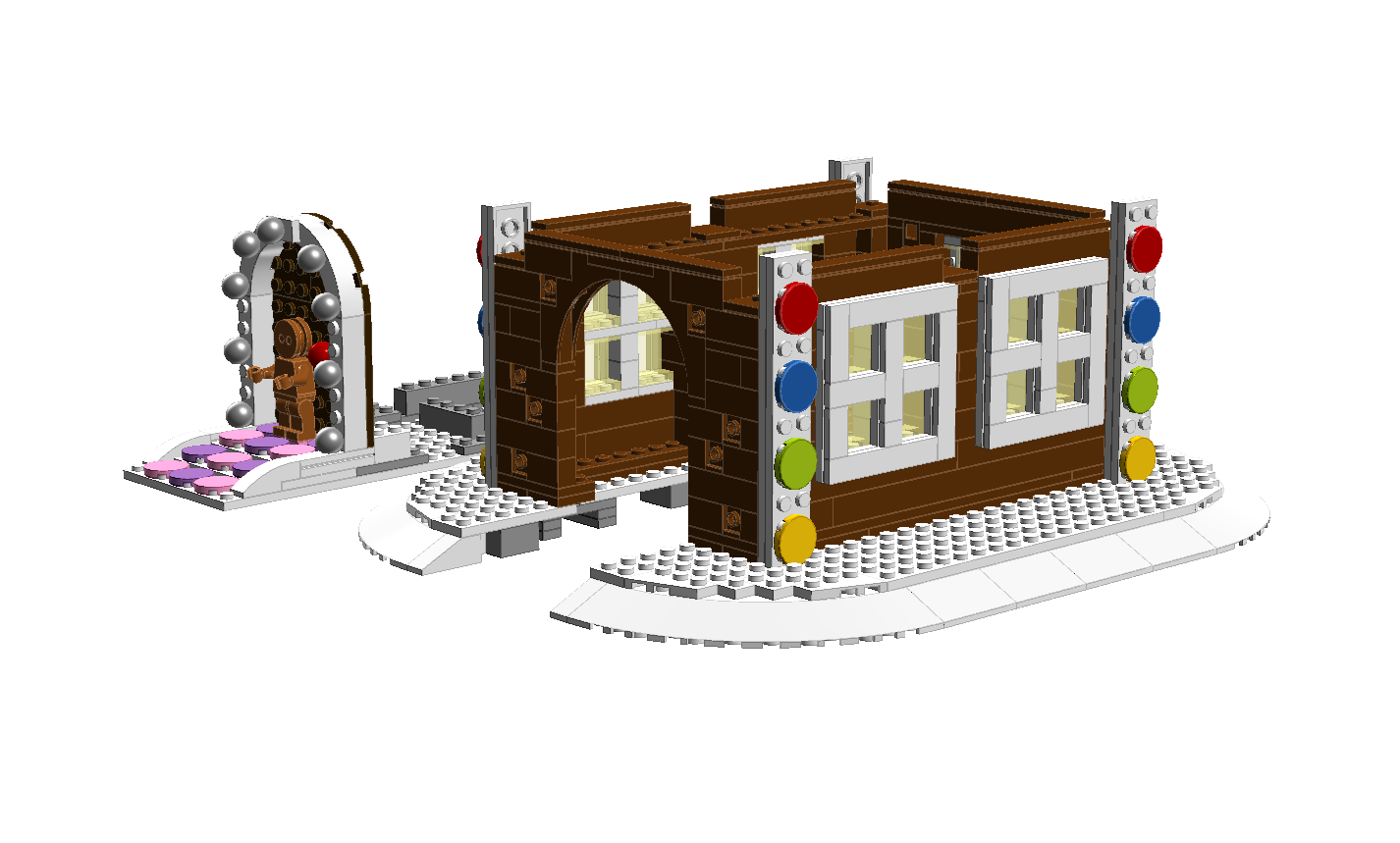 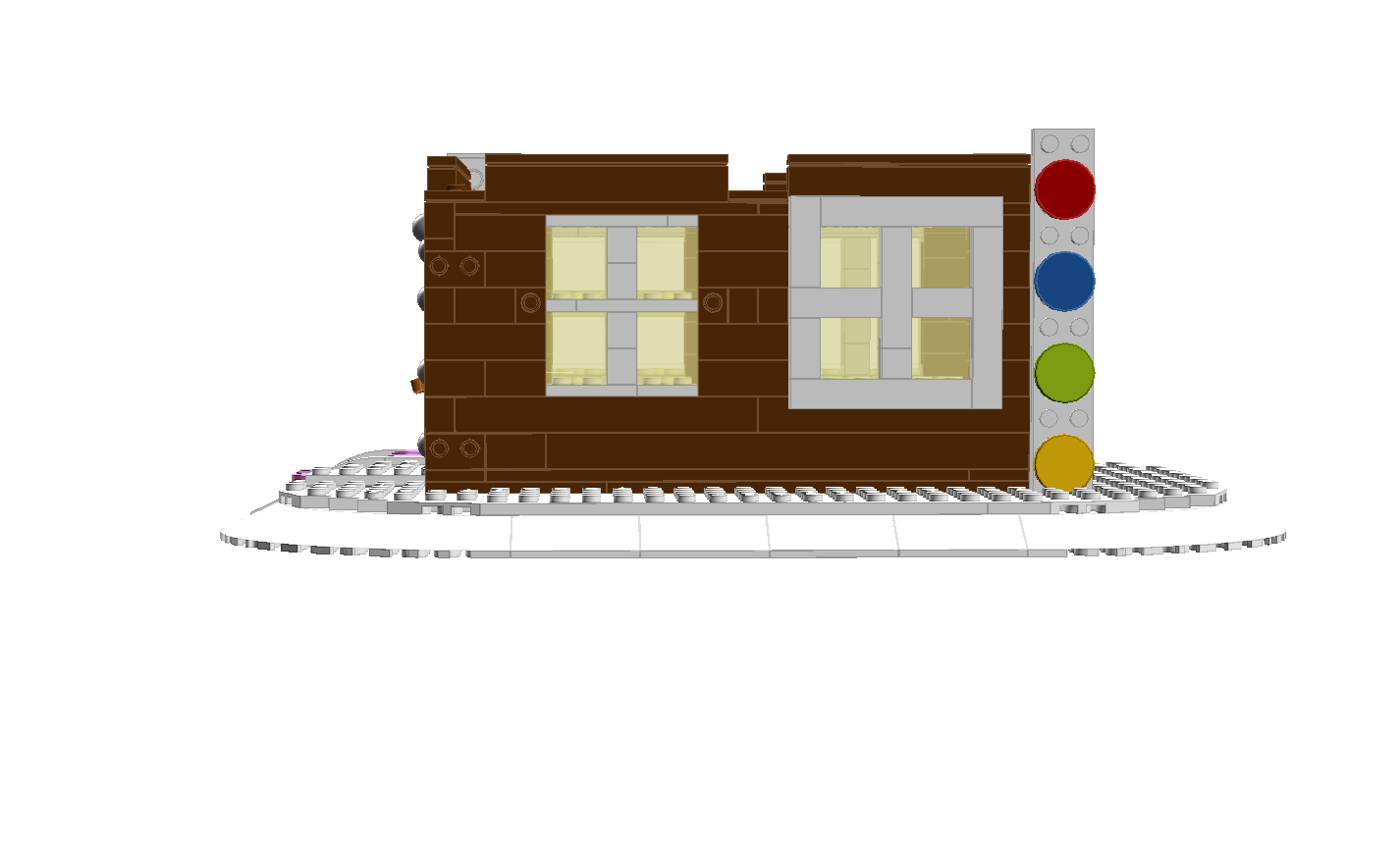 The new top section does not differ much from the original. However, this design contains clips to attach the 2 roof sides in a very easy way. 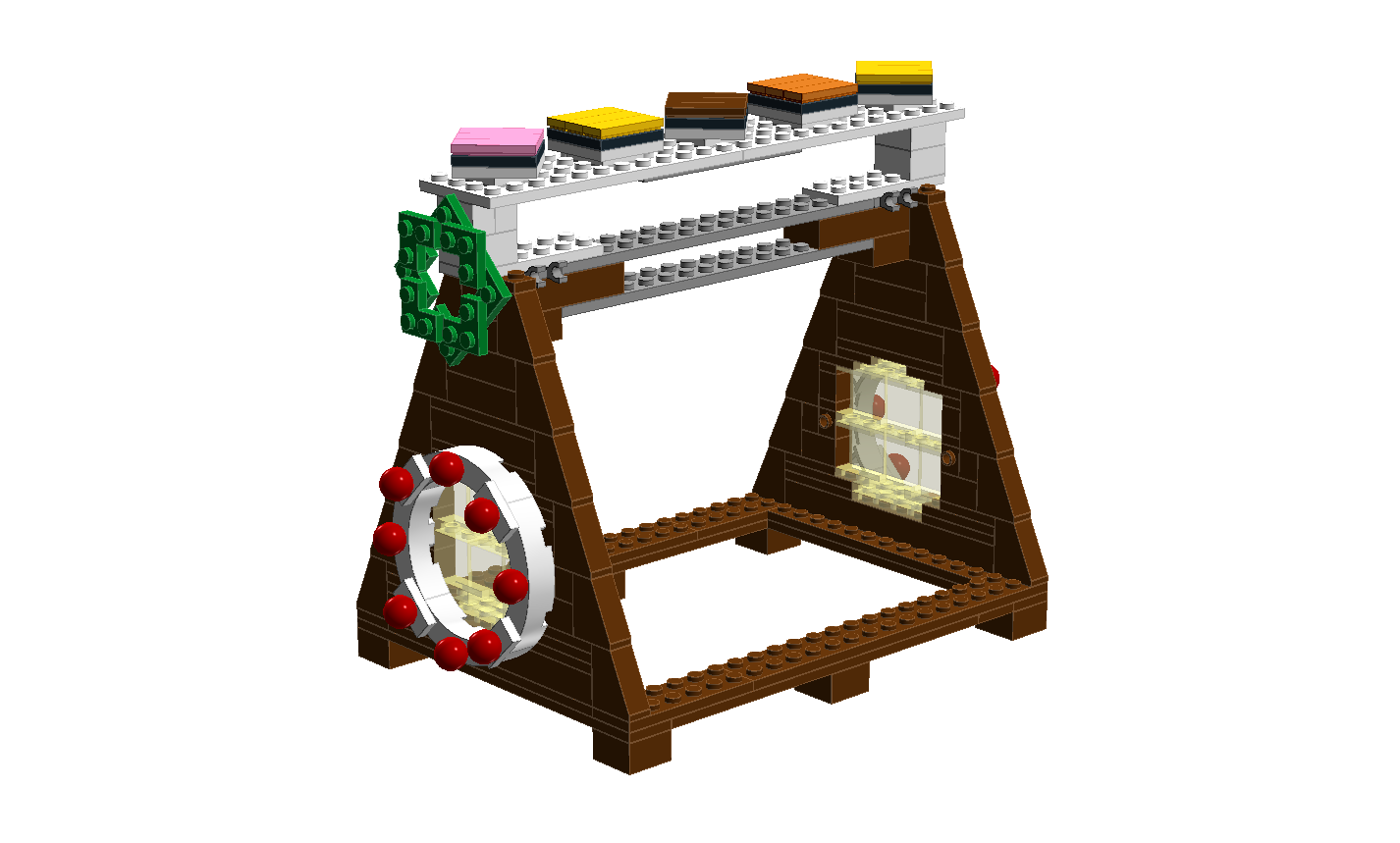 The roof design is completely different from the original build (check previous update) and is now very easy to build. The pictures show really well how the diagonal icing is made. The last picture shows the 2 handles that you can click into the clips on the top section. 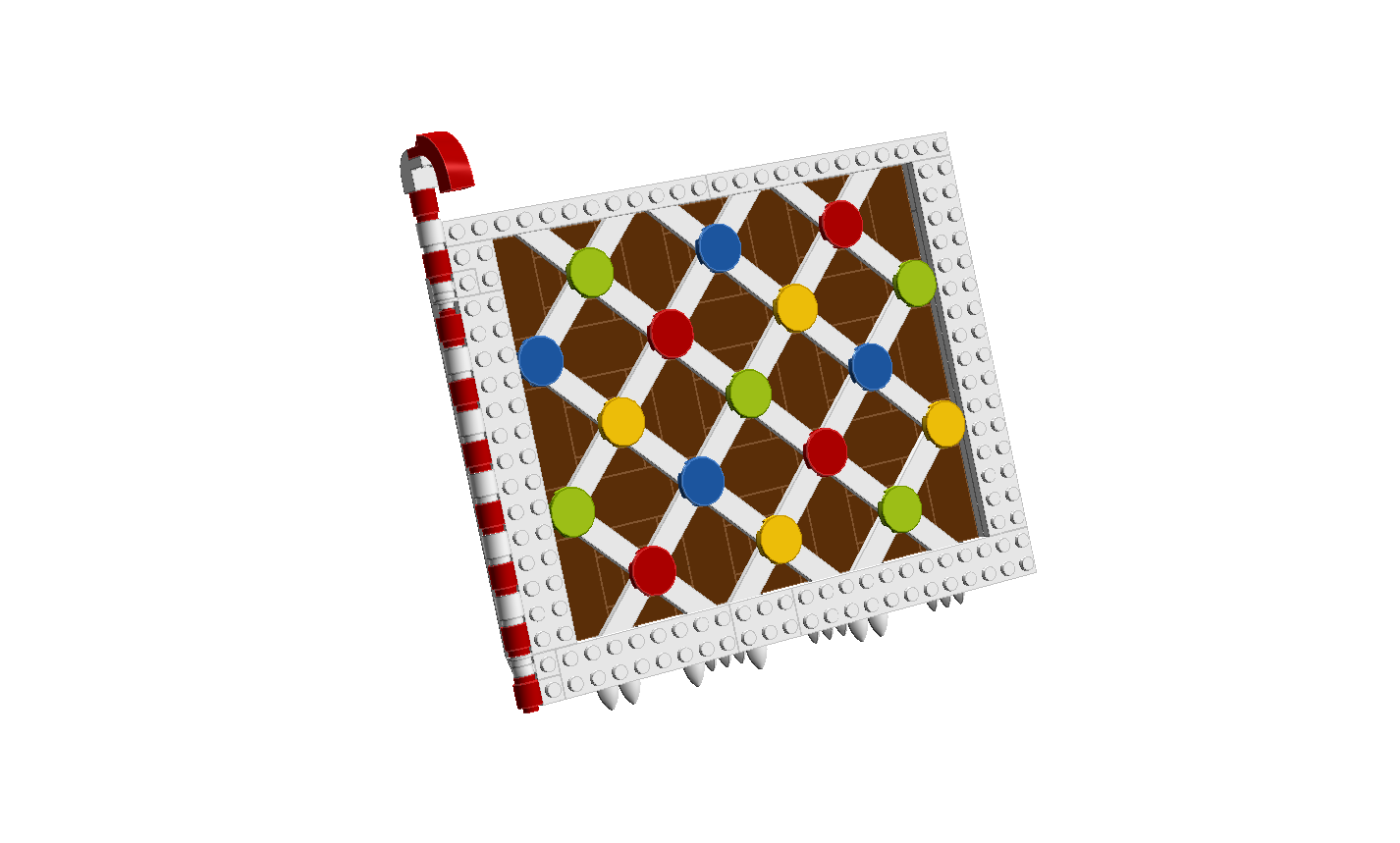 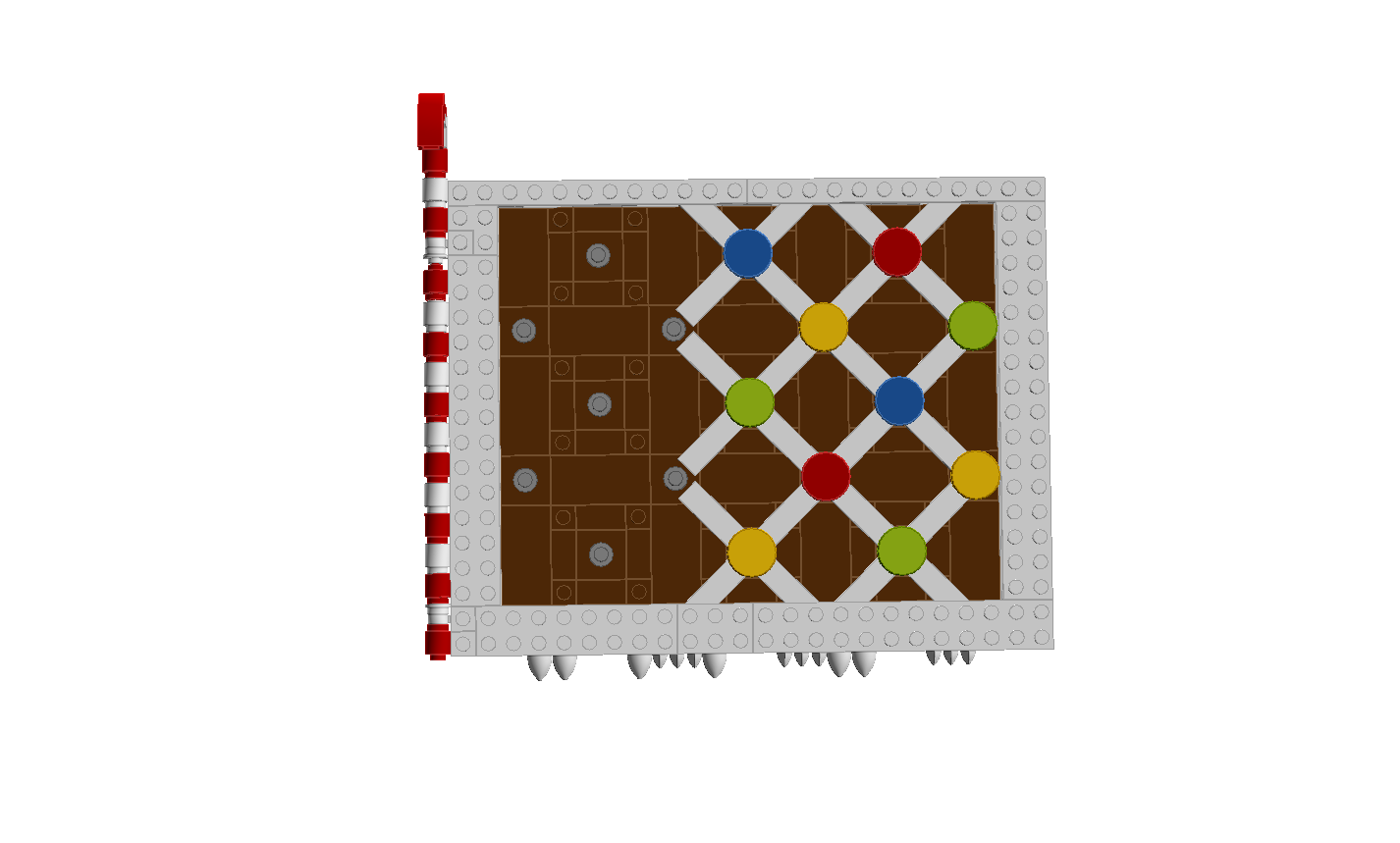 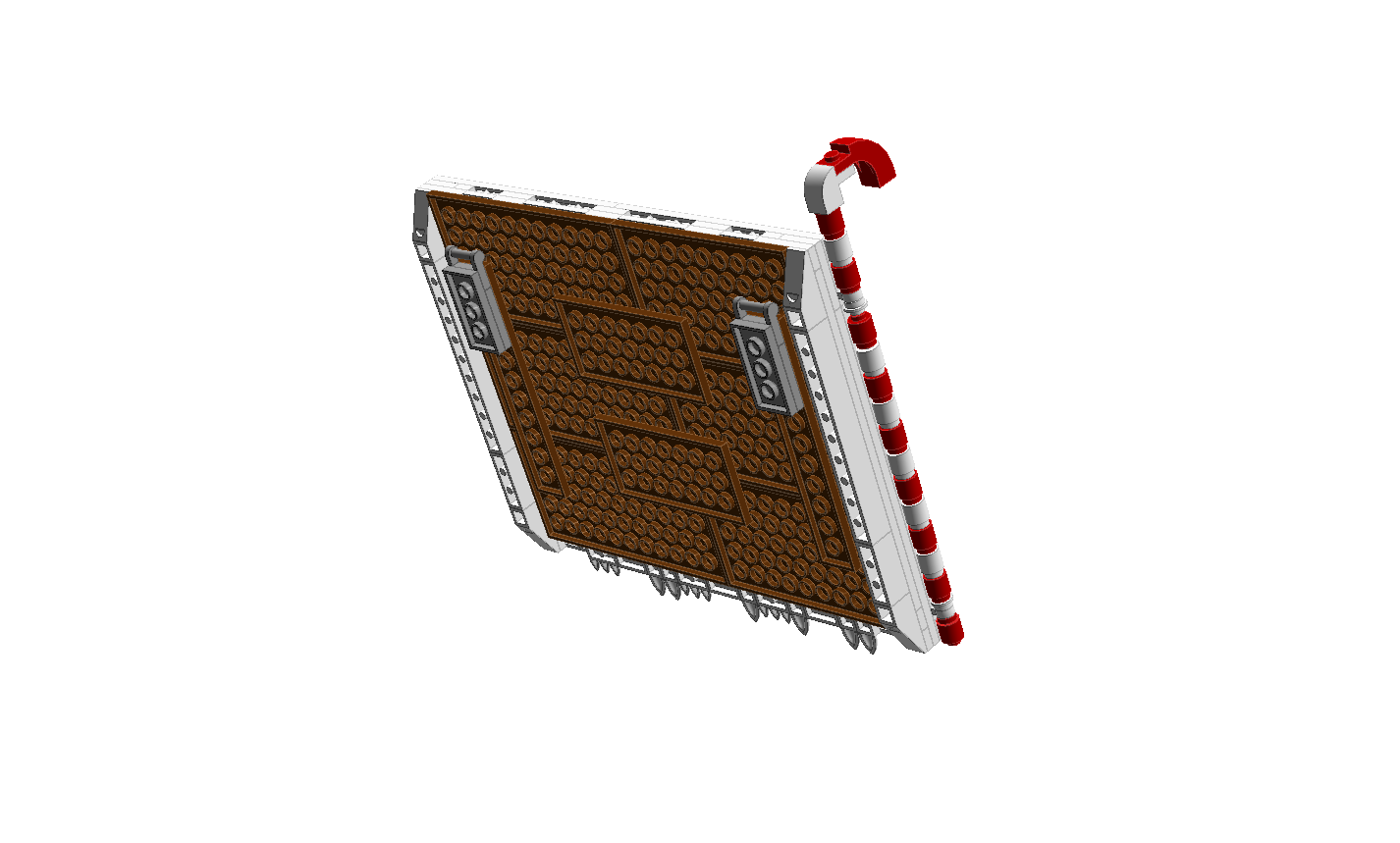 The gingerbread house is divided in 3 sections: the base, the top section and the roof. This makes it easier to build, especially if you are making this set from building instructions. In this update I will show you how each section is build. Just a note: any gray coloured part can be any colour (it’s not visible in the final build).

The base section has a pretty straightforward build and does not involve difficult techniques. The pictures show really well how it’s build, so I will only highlight a few things. The snowy part is for decoration only and is not needed to give the gingerbread house any structure. This means that the snowy base could be left out or made a bit smaller. The plates at the bottom and top of the house itself gives the build structure and the corners support the top section and the roof. In this build the front door can be pulled out to put in an electric light (you could use power functions lights), but this feature can also be applied in another way. For example: the set can be modified to include an interior that you can show just by pulling out a complete wall section instead of the door. The white 'icing' ropes should be on the build as well, but I could not find them in LDD. 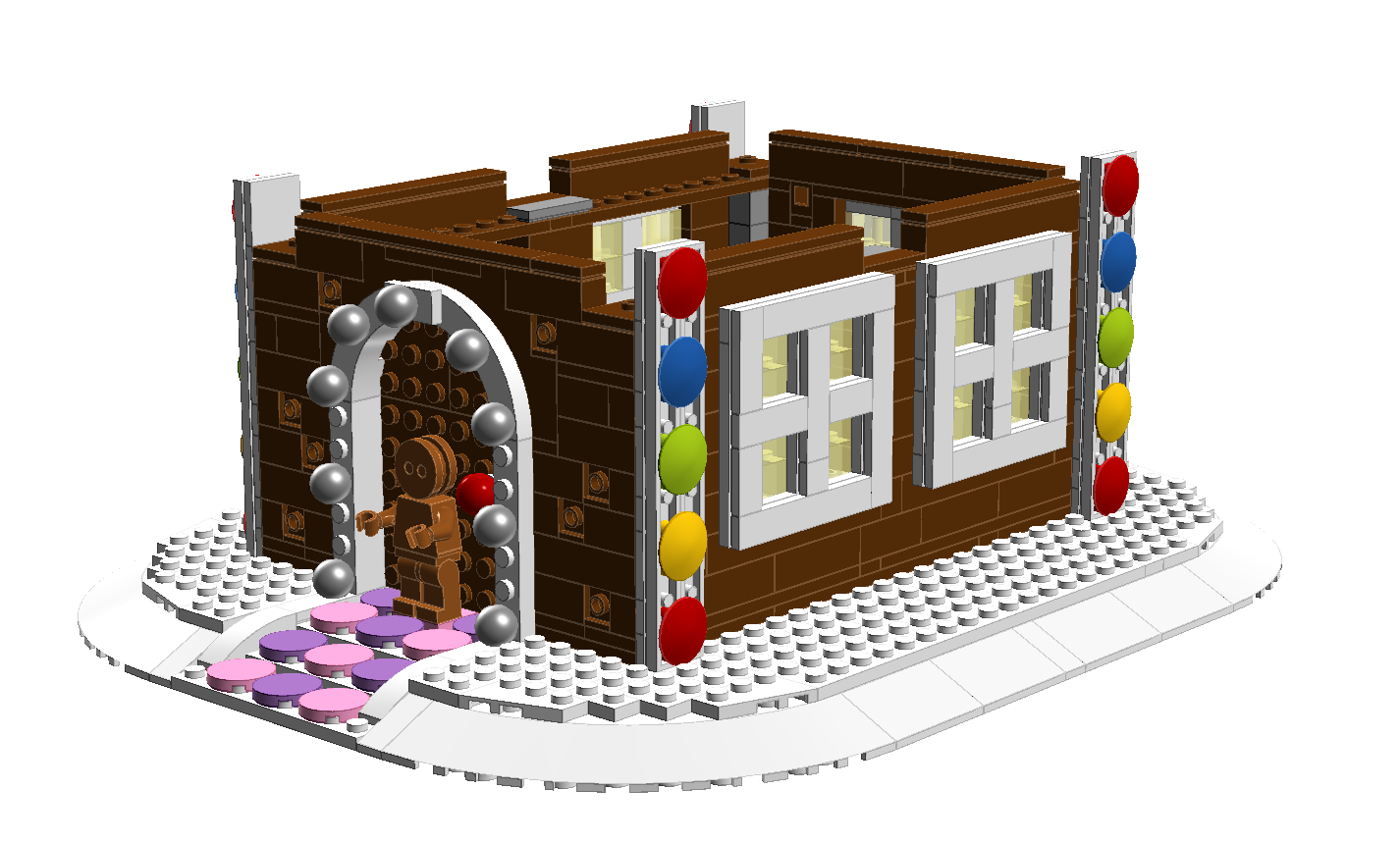 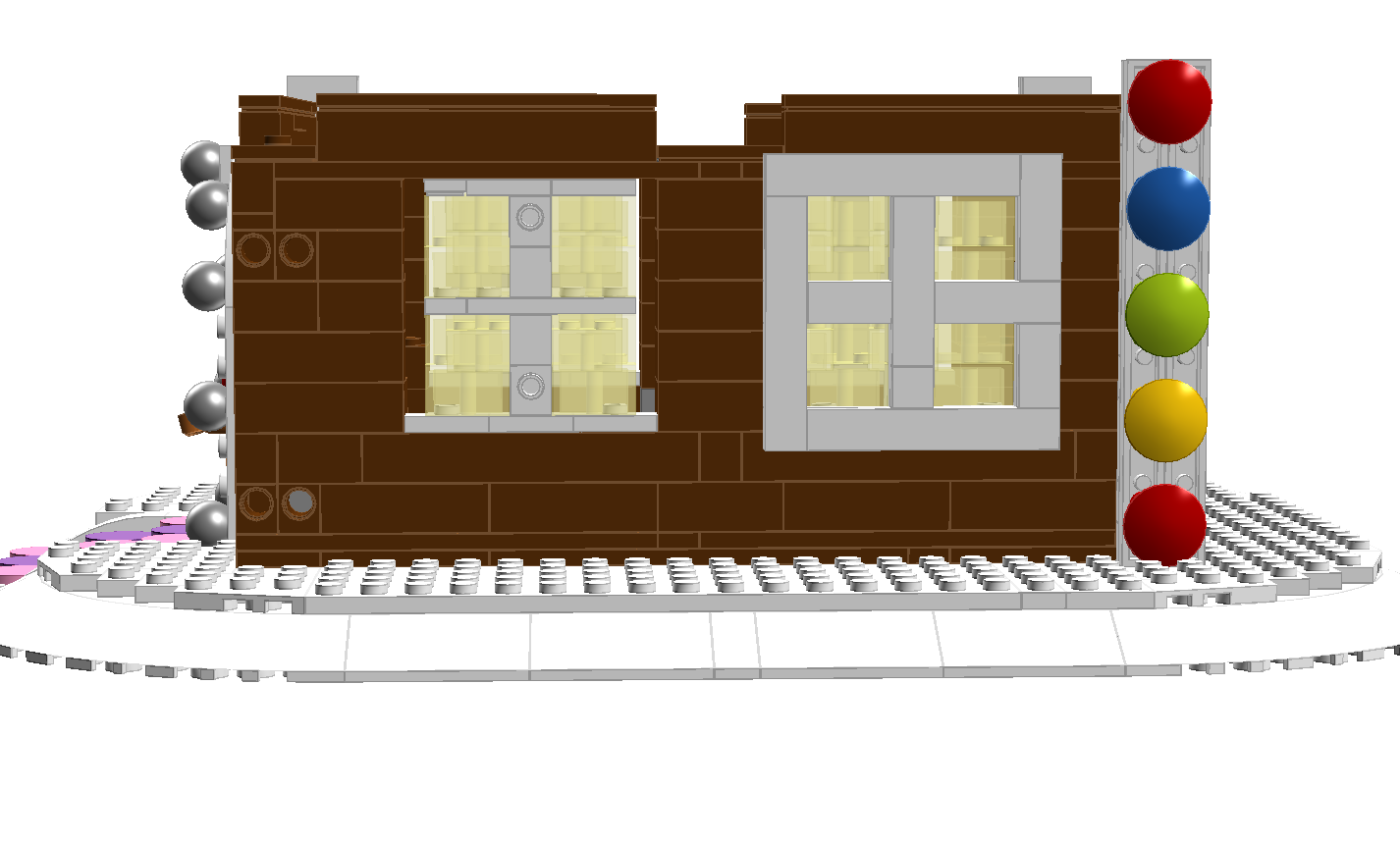 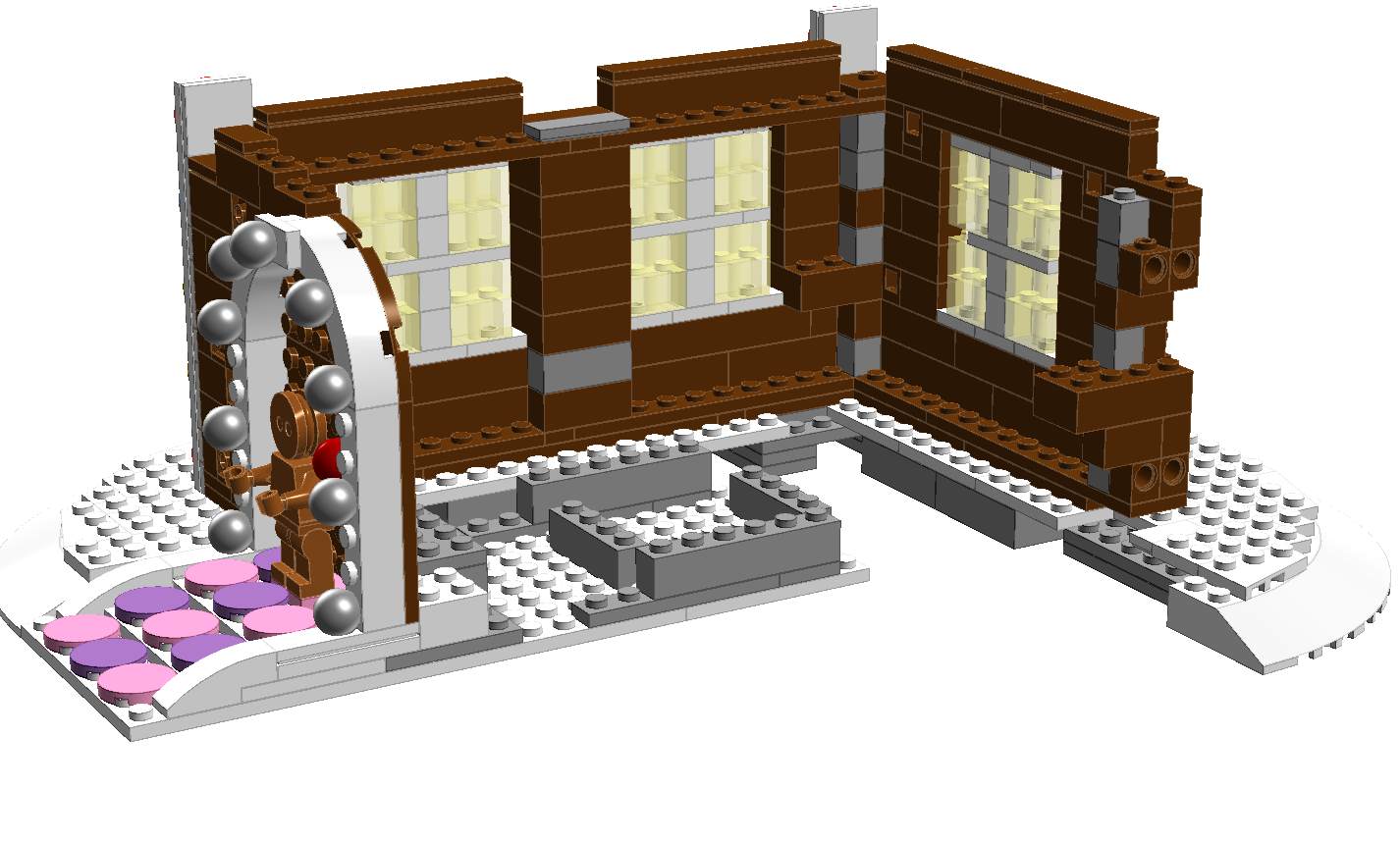 Again, I will discuss only a few things. The white plates below are used to support the roofs. The roofs are not ‘attached’ to the top section but they ‘stick’ to it and rest on the white plates, the brown slopes and the technic beam. The technic beam provides strength to the build. 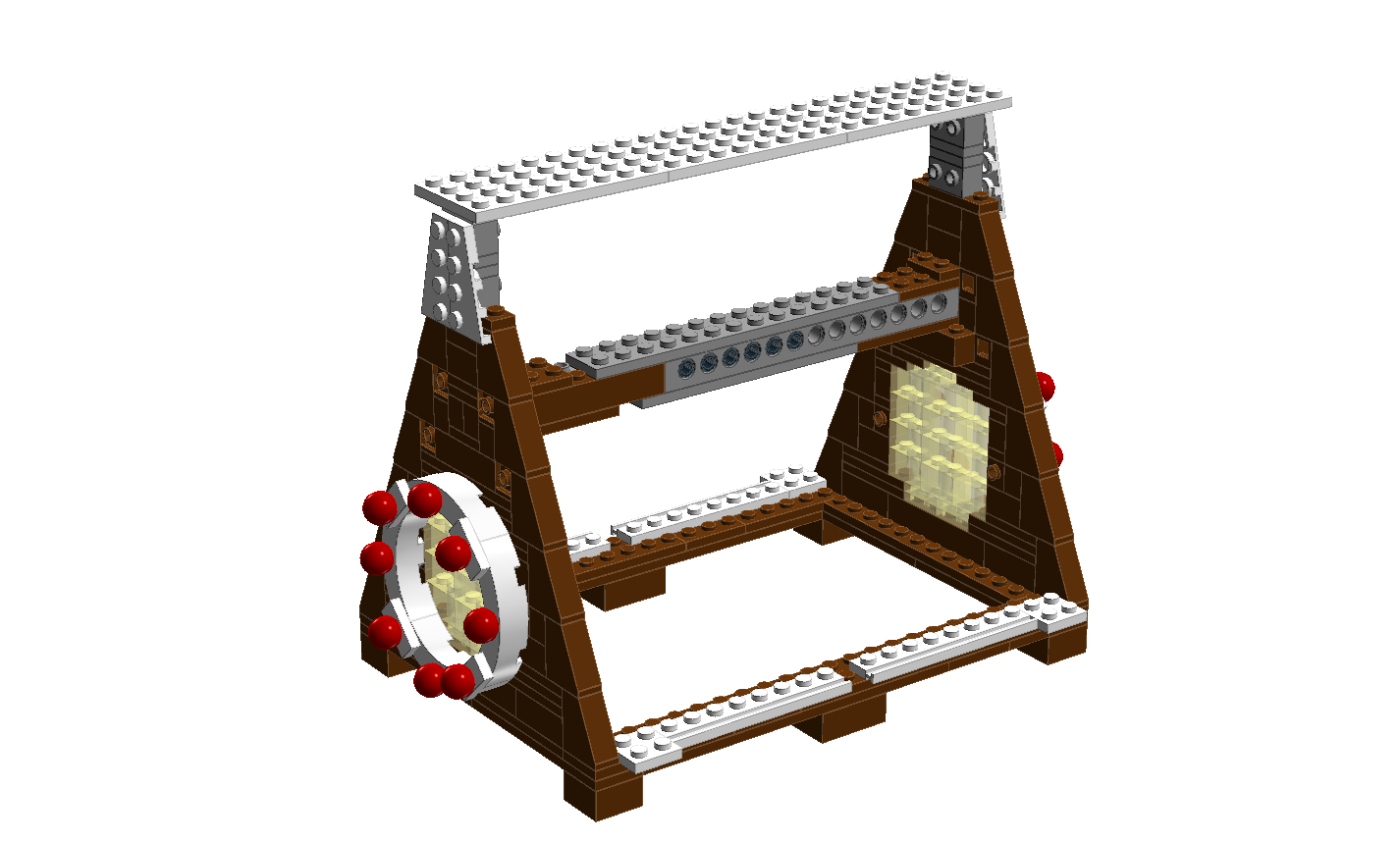 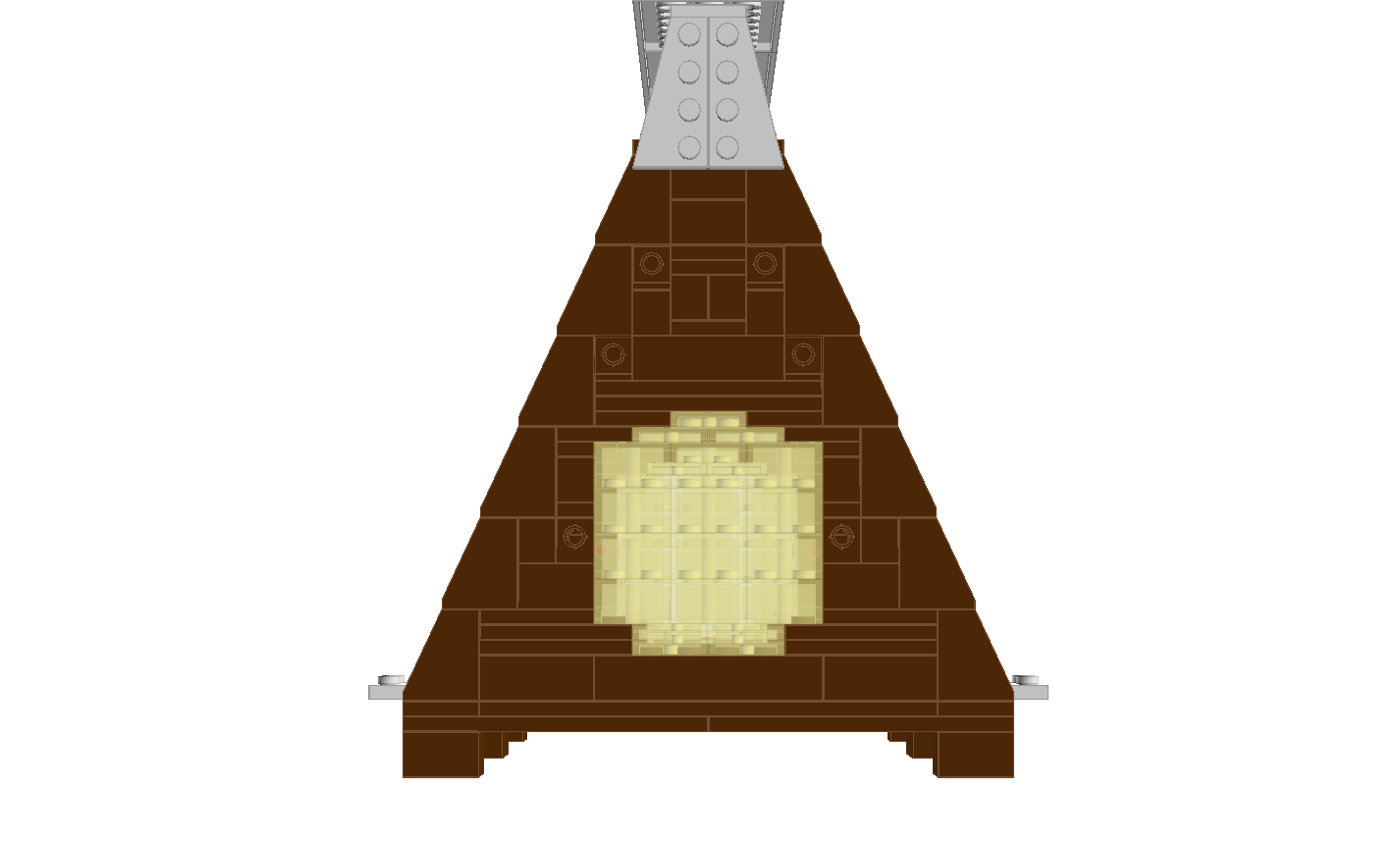 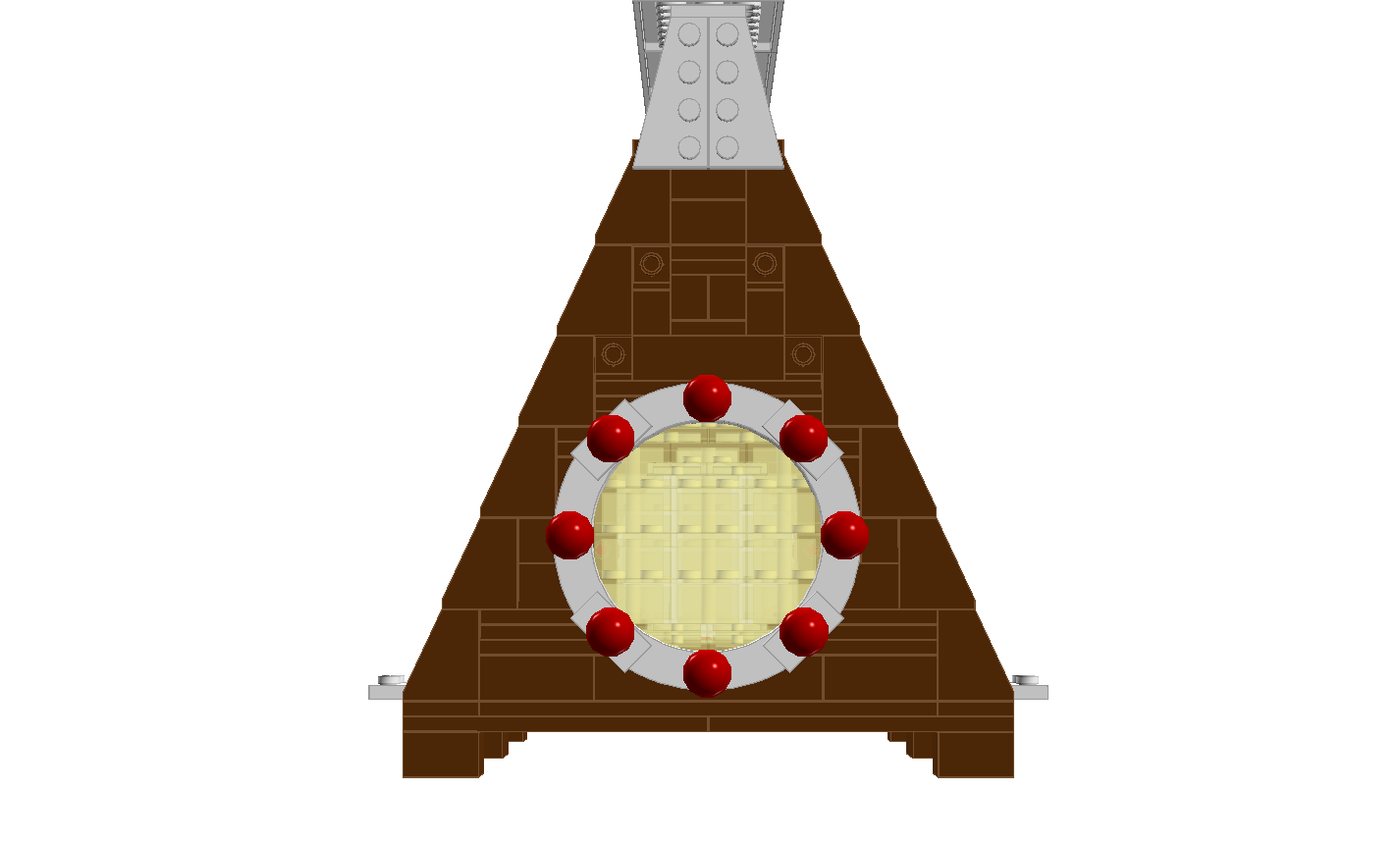 The roof design is complicated, part consuming and hard to place on the top section. But it’s also the most beautiful design I made for the roof. However, it’s unlikely this design will make it into an official set (if we can get there of course) because of the complicity. Anyway, the pictures shows how the roof is made. The pink/ purple plates can be any colour... I just used it to show that the roof contains many layers. The white rim is fragile and can only be put onto the brown roof after it is placed on the top section. 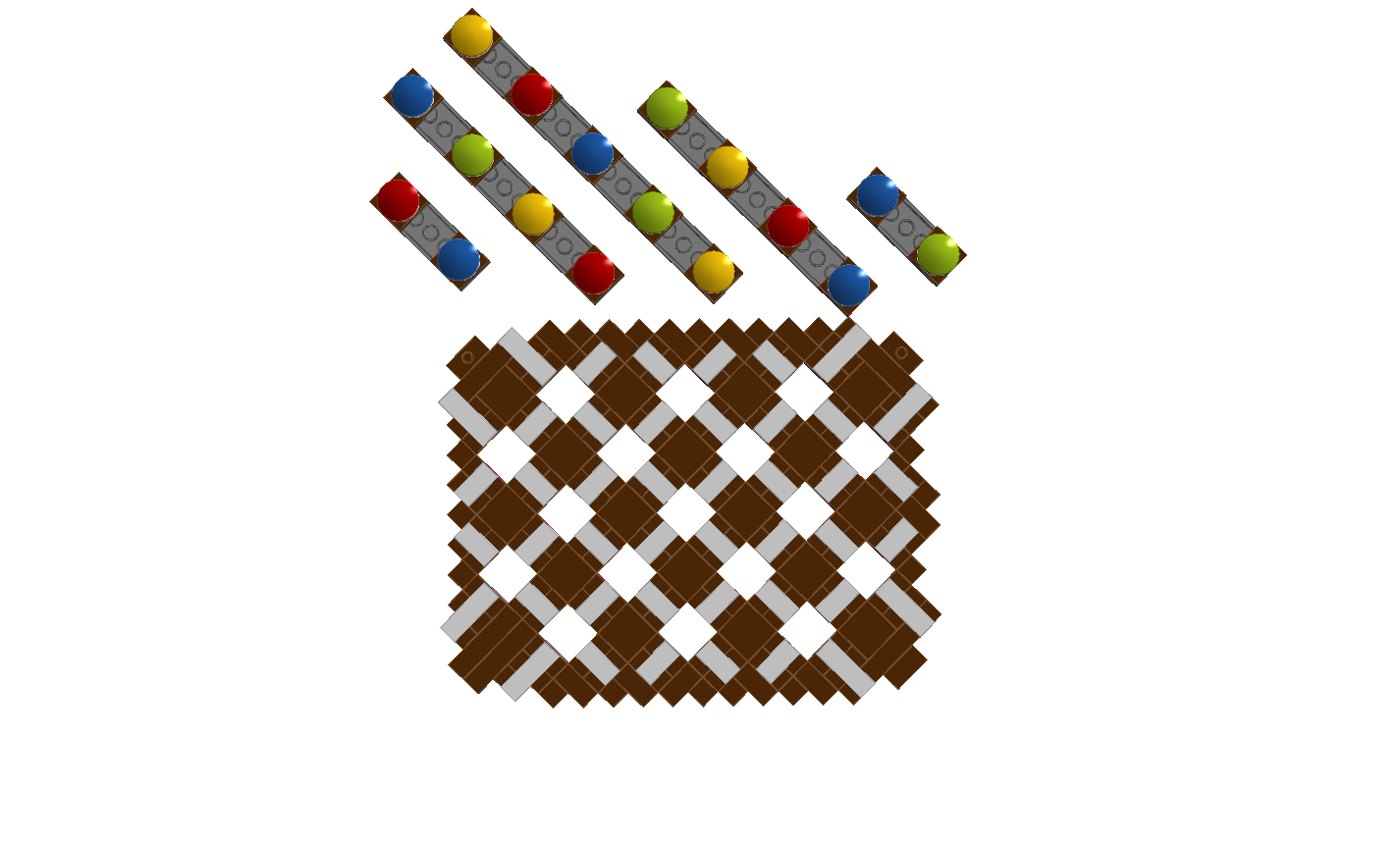 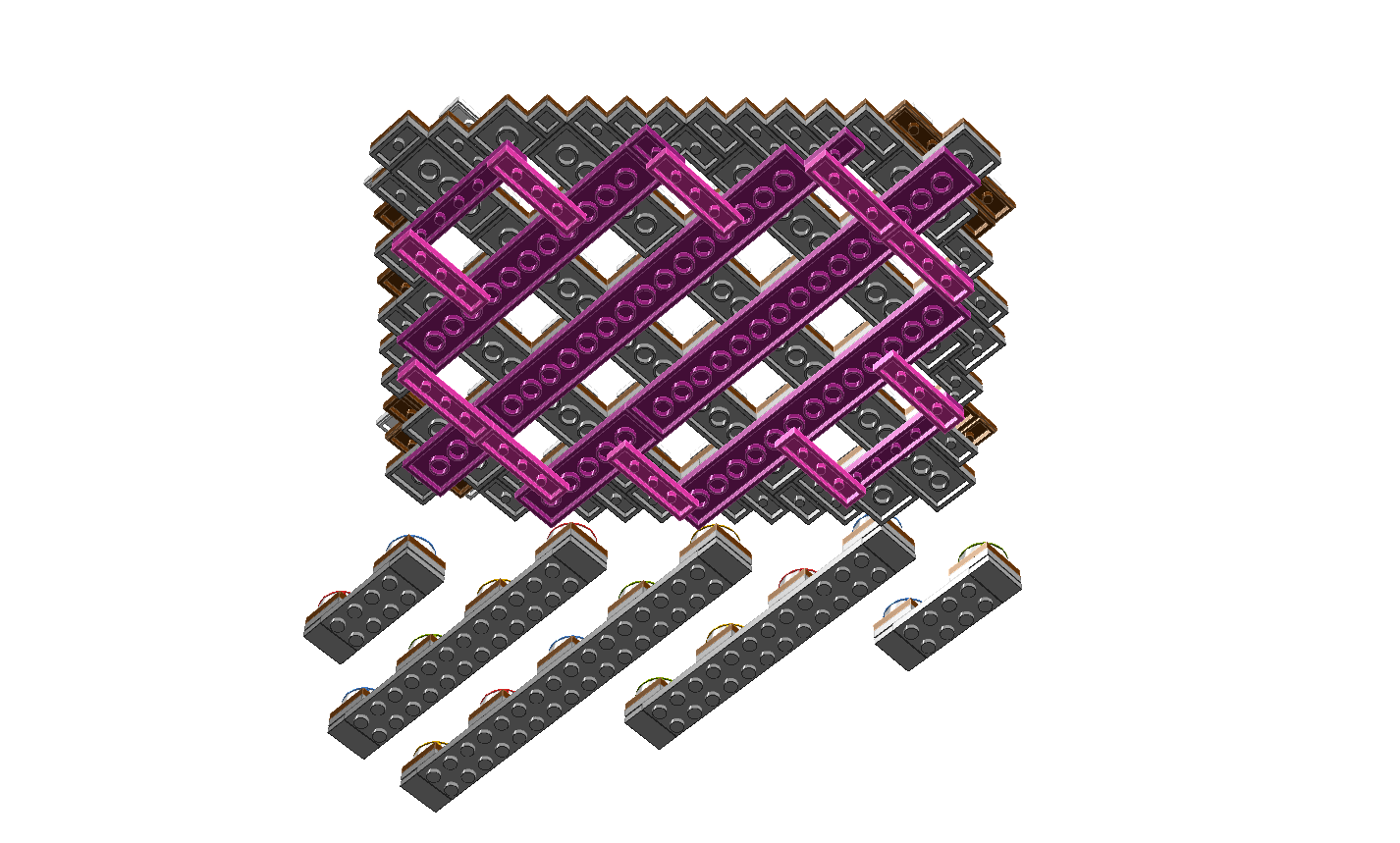 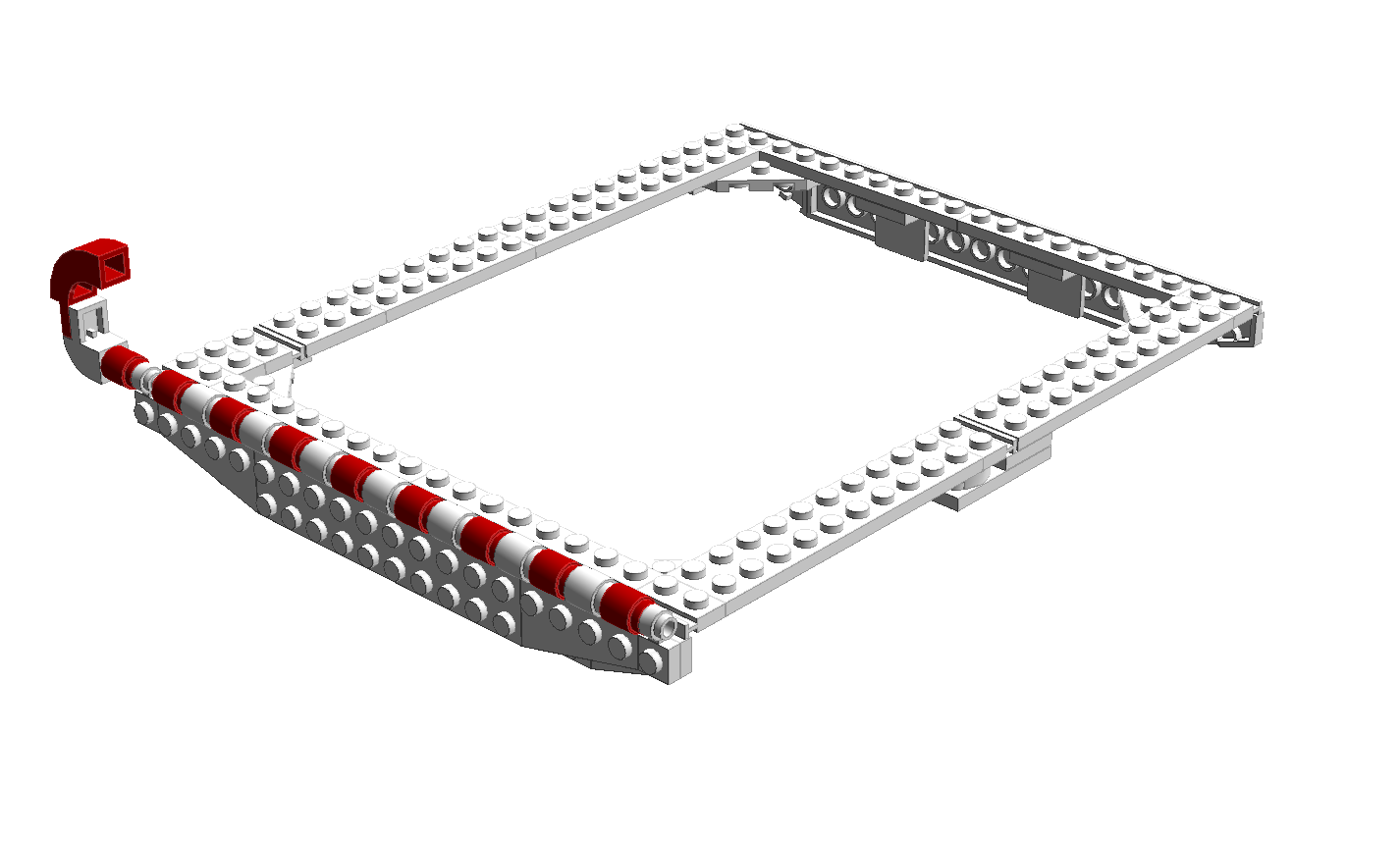 After the three sections are made and assembled it’s time to decorate with candy!

In next update I will show an alternate model that looks almost the same as the original, but uses less parts and is easier to build. I am especially talking about the roof: the alternate roof is easy to build, contains less parts, can be attached to the top section just by ‘clicking’ and looks almost the same as the original roof. With the alternate roof also comes a new snow covered rim that is very sturdy and in the same style as the official Christmas sets.

December has long nights... to enjoy the gingerbread house in the dark you just need to light things up! 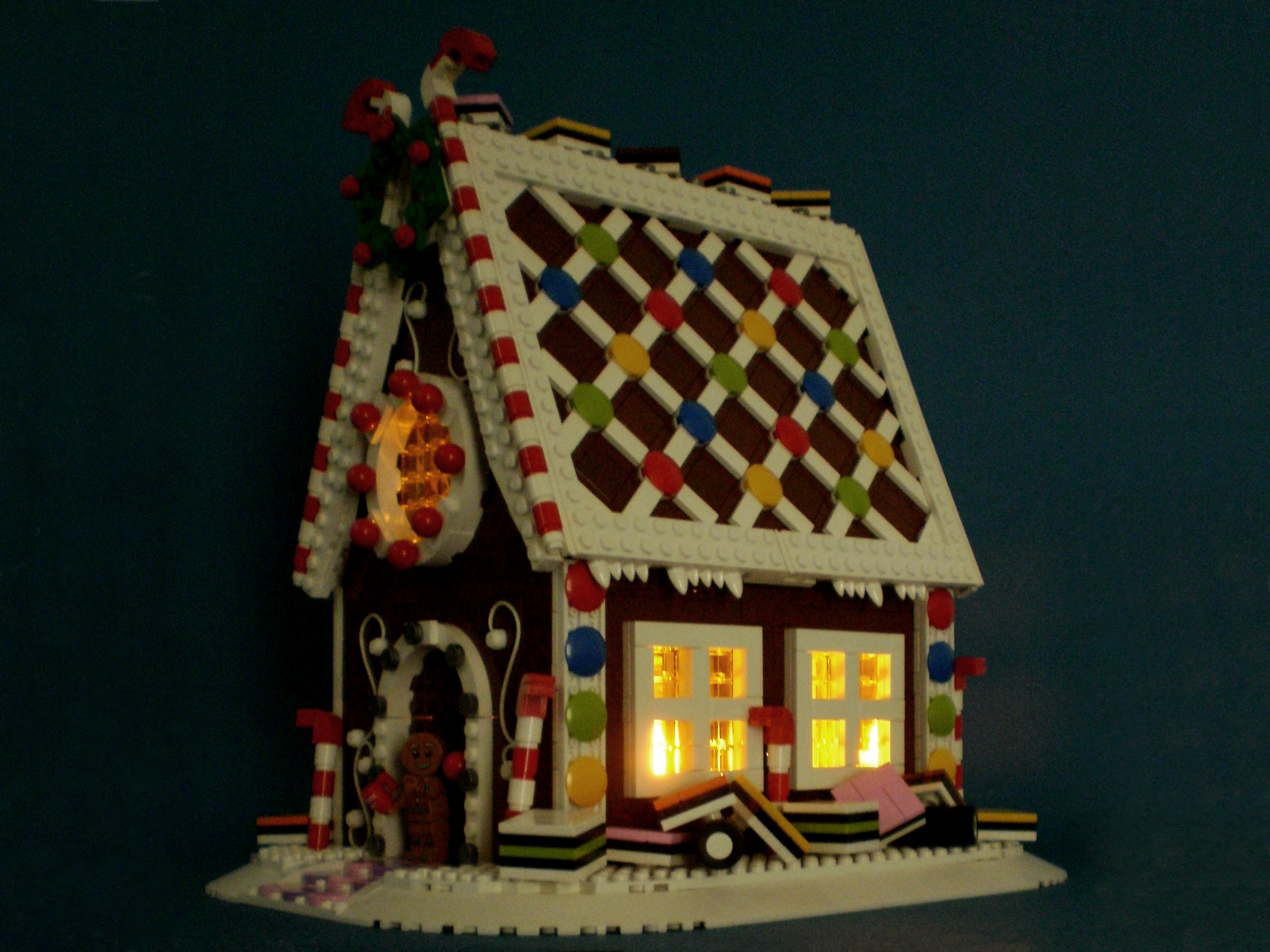 And a few more images from different angles... 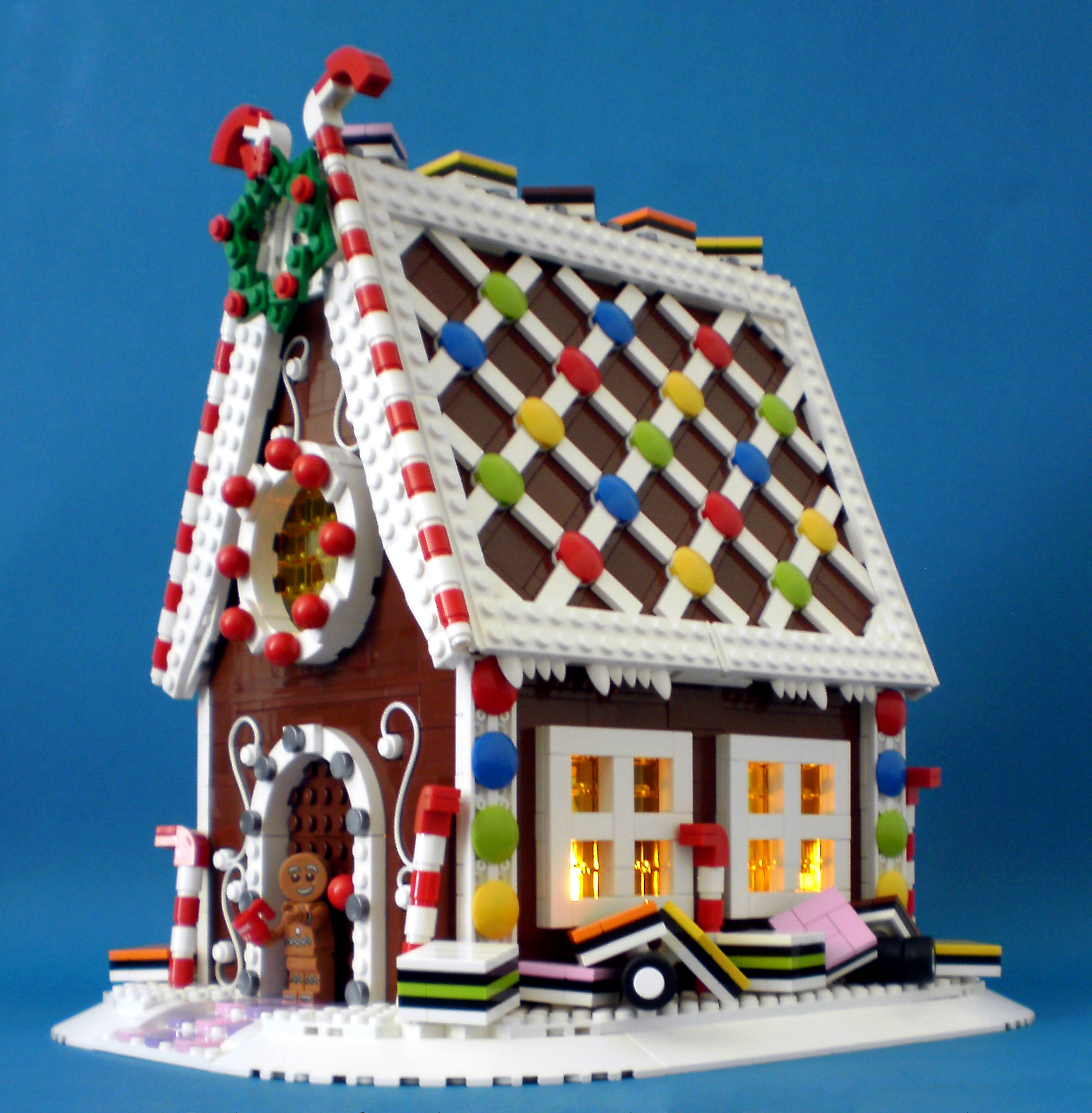 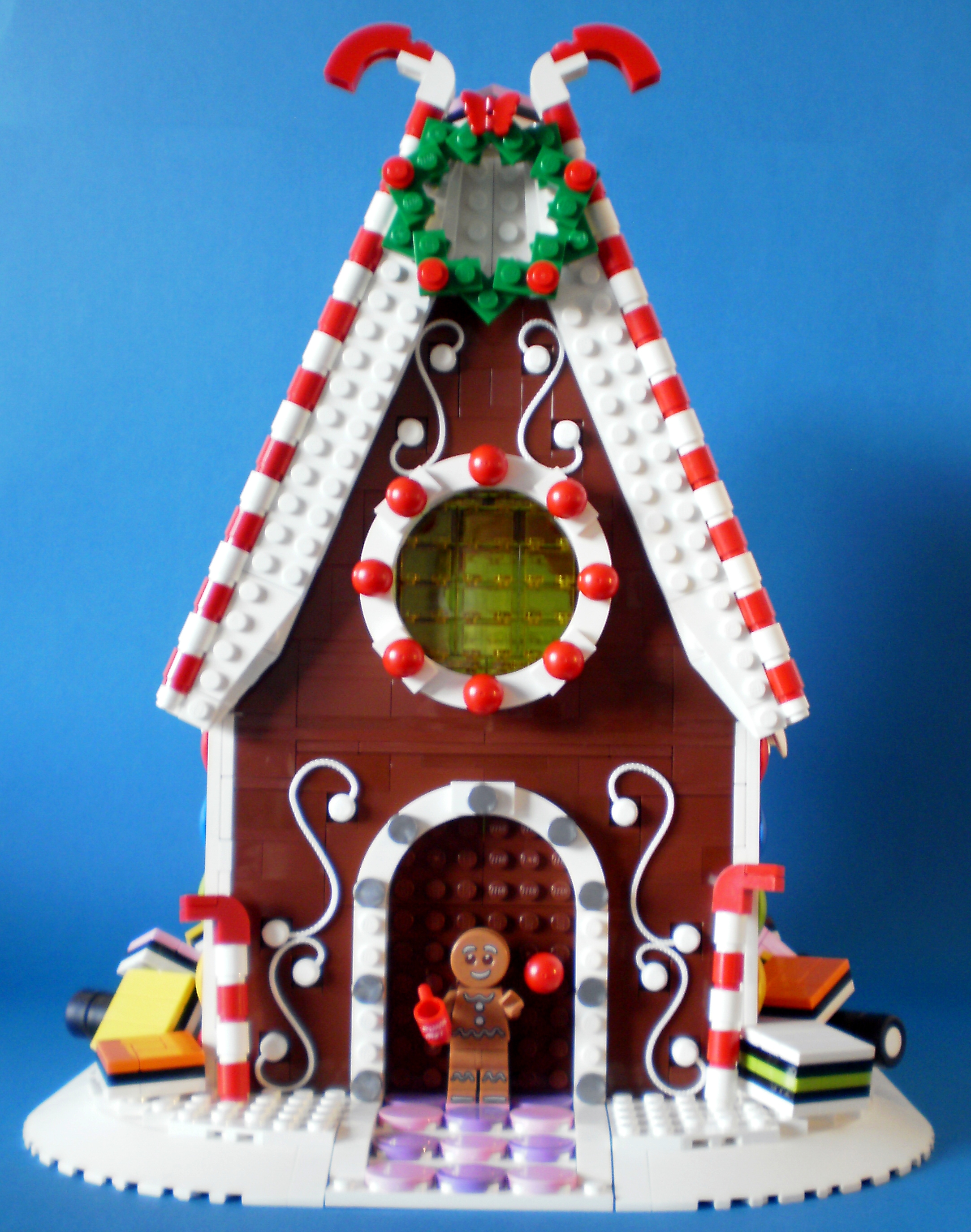 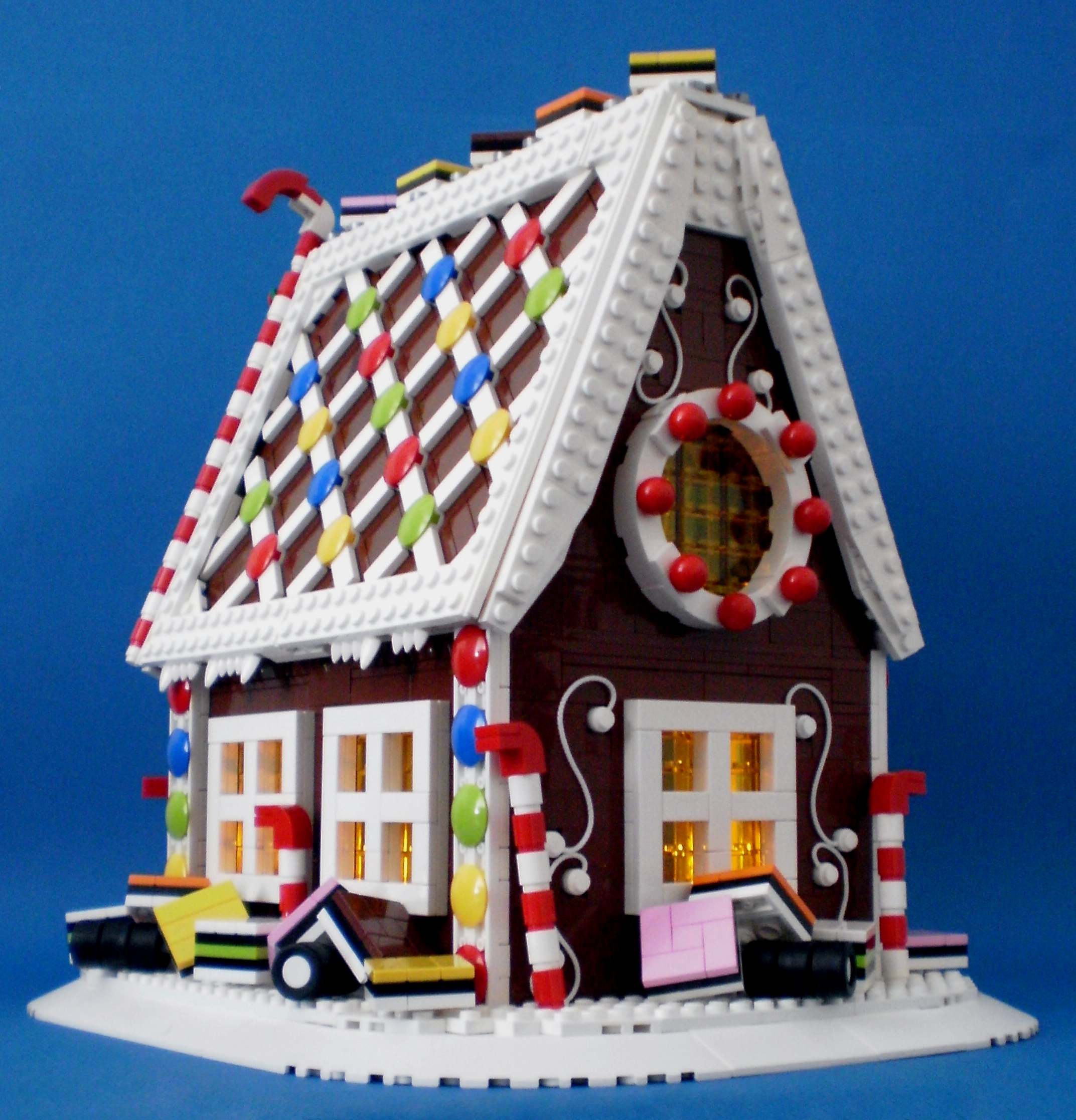