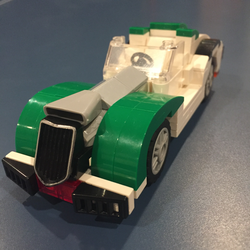 By Xman
77 comments
As seagulls and macaws shrieked and cried discordantly on a small tropical island, a man stared blankly across the crashing waves. He had been marooned.
A rising crew member aboard the pirate schooner, The Captive Phantom, he had incited jealousy among the other deck hands. A vile plot to ruin his career and turn the captain against him had succeeded and the captain's verdict was marooning.
Thankfully, the island was bountiful and the marooned pirate was able to build a hut and obtain food. However, will he ever get of this lonely island? Only time can tell.
Ahoy there shipmates, Captain Xman on the deck! This is my newest model, a jungle hut built by a marooned pirate on a tropical island. A huge fan of the Lego pirate themes (both old and new), I built this model to hopefully (with your support) bring back the much wanted pirates.
This set contains:
1 mini figure
A dilapidated hut
Various forms of wildlife (parrots, spiders, crabs, etc.)
2 palm trees with coconuts
A gold nugget (hid in the trunk of the old cypress tree)
A treasure chest
A grog barrel (he made the drink himself)
A table with knife, cup, and chicken leg
A secret entrance (or exit) in the back
An easily removable roof
A crow's nest with custom flag
836 total pieces
With your support, we can reach 10K and hopefully bring back pirates to the Lego world. Pirates forever!