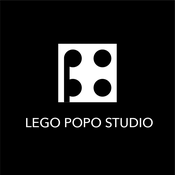 By lego popo
33 comments
Hello! It's a pleasure to meet you here.
Princess Mononoke is an anime produced by Studio Ghibli,1997. It is my favorite anime during my childhood: giant animals, beautiful scenes, and a touching story. The struggles between nature and artifacts were such an impact on me, and I learn a lot from the film: the questions about life and death, different sides making different actions, etc.
I try to make the characters as accurate as I can. And ZERO stickers or printed parts except for minifigures.
The characters are:
1. Ashitaka (アシタカ), a prince of an Emishi village. He is cursed by Nago, a Boar God, and then takes on a trip to find the solution to his cursed fate.
2. San (サン), is a girl who was raised by Moro and fights for the forest.
3. Shishigami (シシ神), an ancient spirit of the forest. It has a deer-like appearance with a red baboon face. It controls lives and turns into a glowing giant every night.
4. Moro (モロの君), the 300-year-old giant wolf god who is capable of communicating with humans.
5. Okkoto (乙事主), the 500-year-old giant mountain boar god who is blind, leads the clan of boars to fight against humans. He turns into demon god eventually and is taken out by Shishigami.
6. Nago (ナゴの守), one of the boar gods with brown fur, was shot by Lady Eboshi and turned into a Demon God. He was later taken out by Ashitaka and cursed him.
7. Moro's children (モロの子), two white wolves who can speak human language and guard San's side.
8. Yakul (ヤックル), Ashitaka's loyal giant serow. It is a lechwe with a red nose.
9. Kodama, little spirits in the forest. They are a sign that the forest is healthy.
Hope you like the work and don't forget to share it with your friends!
By LEGO Popo.