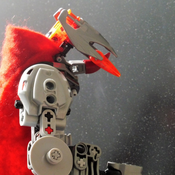 By brickler2000
20 comments
The nickelodeons´ show ´The Breadwinners´ is a story about two ducks who fly around the planet with their Rockettruck to deliver every single duck in the world bread. The Rockettruck is a truck with a rocket on the top, this makes it really obvious. the set will contain the famous Rockettruck from the show and 2 diffrent flavours of bread and each flavour comes with two breads. A problem the set will have is that the Rockettruck in the show is from the inside bigger than from the outside. This makes the set a little bit less worth getting. Why i build this set because the kids can be related to it so they would regonize it. They would ask their parents to buy it   they have seen the Rockettruck on TV. I think this would make a great set in the future and i hope(if it come out as on officially set) that kids would love to play with my Rockettruck. the set design is almost the exact same one as in the cartoon with a little bit more detail. I think this is something that kids would love to play with.