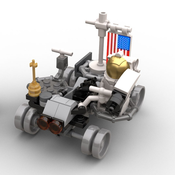 By Brick E McBrickface
145 comments
﻿﻿﻿﻿﻿﻿﻿﻿﻿﻿﻿﻿﻿﻿﻿﻿﻿﻿﻿﻿James Gurney's Dinotopia, published in 1992, introduced a whole generation to a world of imagination and discovery where humans and dinosaurs lived together in harmony. Now, in time for its 30th anniversary, bring to life the iconic locale from the book that partly inspired the planet Naboo from Star Wars and Pandora from James Cameron's Avatar.
Explore Waterfall City, the cultural capital of the lost continent of Dinotopia, from the canals and bridges that span the running waters of the Polongo River to the iconic dome depicting Prehistoric Earth perched above the whitewater of Thunder Falls. At micro scale, all but the largest sauropods are dwarfed by the majestic skyline made up of a blend of Gothic, Neoclassical, Pre-columbian, Art Deco, and Art Nouveau architecture styles.
Animating the scene is a single Powered Up Move Hub which activates a hidden system of gears and treads that simultaneously drive the flowing river, 3 rolling falls, and the spinning One World Globe and the waterway passage underneath it. A hinge door built into the back allows for easy access to the hub, while removing the top section reveals the inner workings.
Paired with the micro scale scene is a playable Skybax (Quetzalcoatlus) named Cirrus and mini-figure of Will Denison, the shipwrecked teenager from Boston who becomes a Skybax rider. A set of mounts allows you to display them alongside Waterfall City or even circling high above the city.
Populating the city are micro builds representing several dinosaurs from the books just large enough to be visible from above:
Accuracy to the original Waterfall City 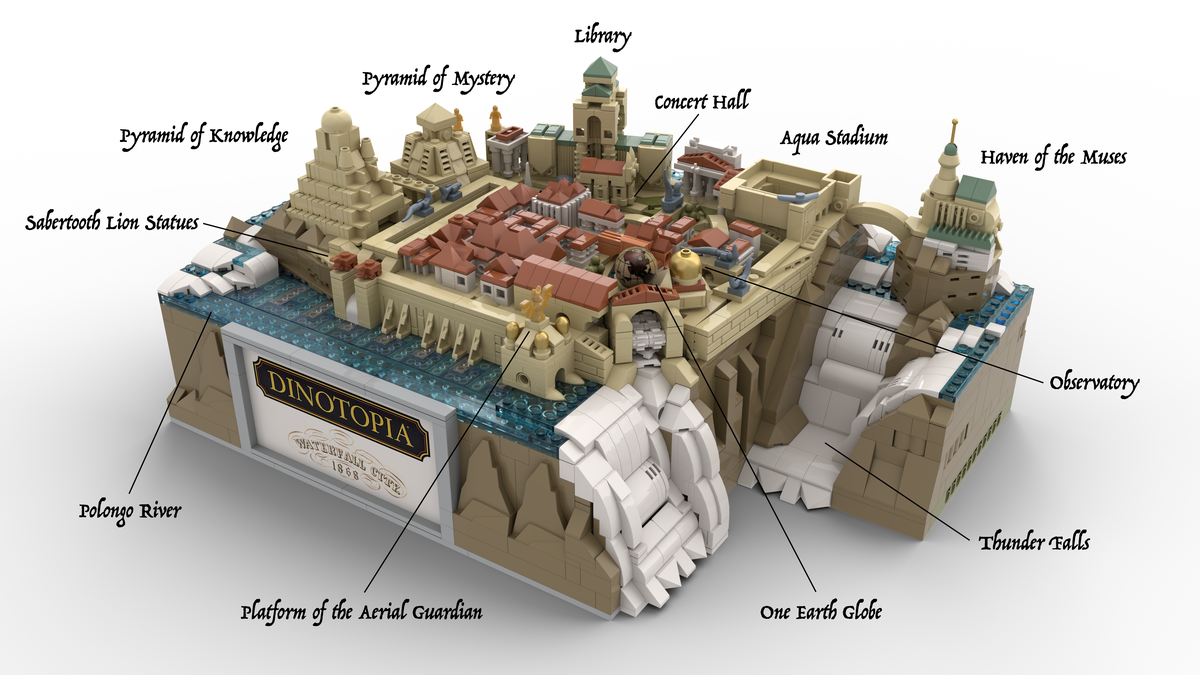 The layout of the city is based on the several large format paintings and a detailed map from the three main Dinotopia books. Thankfully, James Gurney is a meticulous artist who imparted consistency from different angles onto this work of his imagination, partly due to his use of models and maquettes as reference. Recreating this set therefore returns his vision to the physical realm from which it began. Careful attention has been paid to stay true to the number of canals, bridges, and major landmarks that are depicted.
Differences from the original Waterfall City
While being as faithful as possible to the source material, in practice some liberties were taken with the proportional scale of the buildings to the overall city in order to depict them with any meaningful detail, which required the omission of some of the lesser buildings seen in the original works. Also, artistic license was taken to convey movement to the One Earth Globe. In the book, rather than rotating itself, it instead houses an internal time-keeping device powered by the flow of water.
Realistic for production
At 2,650 pieces and measuring 27x40 cm, this build is designed at a realistic scale for production. The set can be displayed from any angle as a collector's piece, while the playable features invite interaction. Technic lovers will appreciate the 33 gears, 36 treads, and various axles included. Adult fans of the books as well as children reading them now can enjoy putting together this nostalgic build.
Why I designed this
Like many kids of the 90's, Dinotopia inspired me with its gorgeous illustrations, creative locations, and utopian vision of amazing dinosaurs and diverse humans living side-by-side in peace. I believe that its iconic status, loyal fanbase, and international success make it the perfect subject matter for a Lego Ideas set. Dinotopia has already been licensed before with a Disney limited television mini-series, so licensing rights from creator James Gurney seems promising, and there doesn't seem to be any licensing conflicts between this and Lego's Jurassic Park/Jurassic World series, as the context of a society of dinosaurs and humans living together differs markedly from it, while the existence of the Flintstones and Dinosaur Skeleton sets demonstrates that the depiction of dinosaurs are not an issue.
Designing this entry and building a workable prototype has been a joy, and I hope to share that enjoyment by succeeding in achieving approval for its production. Thank you for supporting this project!