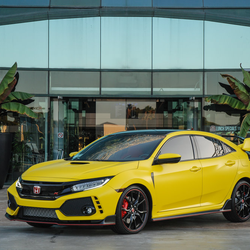 This is a minifigure scale 1995 era truck pulling an atv on a trailer. In the bed of the truck there is a gas can and some tools and the atv drivers helmet. The atv has actual working suspension by using a technic peice and pegs. The trailer has another gas can on it as well as a fire extinguisher and a bunch of tools for working on the atv with. The trailer also has folding flaps that you can fold up and down to roll the atv off or onto on. The trailer connects to the truck via a ball hitch.