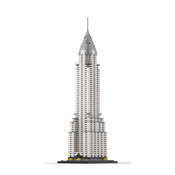 Hello, this is a model of the Berlin TV Tower.

The TV tower was build by the German Post of the GDR between 1965 and 1969. It is positioned on a plaza between Marx-Engels-Forum and Alexanderplatz. The TV tower opened its doors on the 3rd of October 1969. With its total height of around 386m it is the highest building in Germany and the fourth highest building in Europe. It is one of the main and most recognised sights of Berlin.

I created my own version of this building, because, in the last years, Lego is only doing American, British and French buildings and I have no hope that there will be a Berlin TV tower from the official Lego team anytime soon.

I know, that it is not perfect yet and that the area beneath the antenna needs to be rescaled a bit. This will be done shortly.