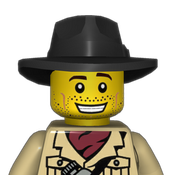 By Jaden Ckast
13 comments
I started with the idea of my love for the ocean. One of my favorite sea creatures is the manta ray. So I started out with the basic outline of what a manta ray looks like and then transitioned it into how it would look if it were a submarine. I was inspired by the aquazone sets when I was younger and many other underwater sets. I tried to utilize some of those same cockpit pieces in its design. I would love for this to be made into a lego set so that others can enjoy the look and feel of what a submarine of the future could like. Some of the stand out features include: Fully detachable front cockpit that seats 2 pilots, 2 Fully rotatable 360 degree gun turrets, rear compartment that seats the engineer, Fully rotatable engines.