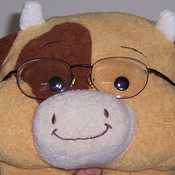 The Atari 2600 Video Computer System is a classic.  The original version from 1977 had six switches on top and came in a thicker, heavier case and it was nicknamed the 'Heavy Sixer'.  Later versions came in lighter cases, with only four switches, or with a black front panel instead of woodgrain.

Ever since I was a kid, I had two loves: LEGO and Atari.  One day while looking at an arch piece I noticed that it was almost the same thickness and shape as the curve of the front of the Atari Heavy Sixer.  And when I noticed the round tiles were the same size as the classic Joystick fire button, I just had to build an exact replica.  The original Atari 2600's also came with a set of paddles and a second joystick, but a single joystick is more iconic (and reduces piece count).

This is a 1 to 1 scale model of the Original Atari Heavy Sixer.  All six switches slide like on the original.  There are two joystick ports and a video cable on the back.  The case is thick and curved as the original, with the brown 'woodgrain' on the front.  The switch labels and Atari logo from the original would have to be stickers on the model.

The Joystick is also to scale.  It includes the original colored direction markers on the base, later versions of the joystick would just be black.

The Cartridge has a lip that lets it 'snap' into the LEGO 2600 but still be easily removable, similar to the original Atari design.  I created a generic Atari Logo on the cartridge here, but a 'Combat' cartridge sticker would be more appropriate.

In my model I also included small details like the bolt holes, A/B switch and serial number label on the bottom (These could be omitted in the final model to reduce piece count).  It is very hard to see in the pictures, but on the real Atari 2600, there are unused speaker vents under the top.  These are also recreated in the model using Plate, Modified 8 x 8 with Grille and Hole in Center 4151b.

Classic gaming is very hot right now with some companies even reproducing their old machines.  Why not have a version you can create yourself out of LEGO?  And at 1 to 1 scale, it would look like you had the machine that started it all: The Atari Video Computer System.