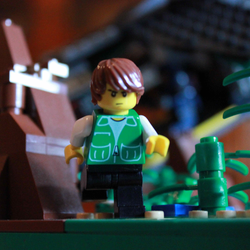 The T11-4 Mantis is an advanced fighter jet with rotating guns and cannons.  It also has a long range radar and storage in the back.  Reaching up to four times the speed of sound the Mantis is also fit for space travel and has a basic fold warp drive that can take it to any star at will.  The Mantis is used by the peoples of the Lost World that rests deep in the blackness of space with now sun.  The Mantis includes two rotating guns, tow spring-loaded missiles, and opening cockpit, and a dual crate cargo hold.  The Mantis is powered by the green energy disks on it's wings.  The blue stripe on its wing indicates its squad and rank.  The single stripe indicates the highest rank of Commander.