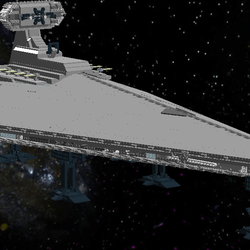 Kuat Drive Yards mainly sold its products to the Galactic Empire, and the Galactic Republic previously. Many Kuat products could be found in TIE Fighters , armored fighting vehicles such as AT-STs and AT-ATs, Star Destroyers, and other military vehicles. Kuat Drive Yards did not sell only to the Imperials, however; many planetary governments purchased its weapons for the purposes of defending their planet from the war. These circumstances helped to make Kuat Drive Yards one of the most famous corporations in the galaxy. (Wookiepedia)

My representation of Kuat Drive Yards (KDY) includes 1,373 pieces. The half-finished Imperial-class Star Destroyer is being worked on by a human-controlled maintenance crane that rotates nearly 180 degrees, but connected to the crane are two construction arms controlled by a droid brain. 5 display stands are included that can be placed under the Star Destroyer. I would suggest the set includes 2 construction workers and 2 stormtroopers.