Johnny Sokko and his Flying Robot 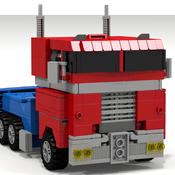 When danger arises Johnny opens his speciallized watch to summon his flying robot to defend the earth against those that would do it harm. Based on the Japanese TV Show Giant Robo, Johnny Sokko and his Flying Robot brought their story to a North American audience in the typical Japanese tokusatsu style of the late 60s and 70s.

This model is an articulated representation of Johnny's Robot with Johnny minifigure and his watch which he uses in every episode to summon his big blue friend to defend the earth.